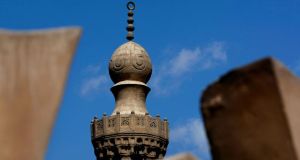 The minaret of the Mamluk 14th century Madrasa of Sarghatmish is seen through the crenellations of the Tulunid 9th century Mosque of Ibn Tulun in Cairo. Photograph: David Silverman/Getty Images

Over the past century, the Middle East has been racked by nearly constant conflict, but the frontiers of the region’s modern states have remained fixed, at least in part due to secret deals made by the British and French well before the outcome of the first World War had become clear.

When, on June 5th, 1916, the Arabs launched their revolt against the Ottoman empire, Germany’s ally, their partners Britain and France had already decided to betray commitments given to the Arabs for joining battle on the eastern front.

The Arabs had agreed to take part in the war in exchange for independence for Arab lands ruled by the Ottomans. In correspondence conducted from July 14th, 1915, until January 30th, 1916, Britain’s Sir Henry McMahon told Sherif Hussein of Mecca, that Britain would, without “detriment to the interests” of France, “recognise and support the independence of the Arabs in the regions within the limits demanded” by the sherif.

Britain also promised to advise the Arabs on “suitable forms of government in those various territories”. In turn, the Arabs were to recognise British “special administrative arrangements” in Baghdad and Basra.

In spite of the qualified commitment to Arab independence, Britain’s Sir Mark Sykes opened talks with France’s Georges Picot May 16th, 1916, with the aim of betraying the Arabs, abrogating the McMahon accord, and carving up Ottoman domains between their faltering empires.

At the Versailles peace conference in 1919, TE Lawrence, the British army officer who had encouraged the Arabs to revolt against the Ottomans, tried and failed to overturn the Sykes-Picot agreement.

France received Syria, Lebanon and Turkish Cilicia free and clear of any obligations to the Arabs, while Britain secured Iraq, Palestine, Jordan and the Trucial states of the Arab Gulf. The best Lawrence managed to do was to secure for the sons of Sherif Hussein, Faisal and Abdullah, the thrones of Iraq and Jordan. France and Britain put down anti-colonial revolts with brute force.

Britain had taken betrayal a step further in November 1917 when foreign secretary Arthur Balfour declared that the government “viewed with favour the establishment in Palestine of a national home for the Jewish people, and will use their best endeavours to facilitate the achievement of this object, it being clearly understood that nothing shall be done which may prejudice and civil and religious rights of the existing non- Jewish communities in Palestine”.

The sherif was given assurances in January 1918 that the “political and economic freedom” of the Palestinians was not in question.

Camouflaging their imperial ambitions during 1918, Britain and Britain and France promised the “complete and final liberation of the peoples who have for so long been oppressed by the Turks, and the setting up of national governments and administrations deriving their authority from the free exercise of the initiative and choice of the indigenous populations”.

The Arabs only gained independence after the second World War after more strife, while Britain effectively handed over Palestine to the Zionists, whose underground army expelled the majority of Palestinians from 78 per cent of the country captured in 1948-1949.

The lines drawn by Britain and France in the sand, across mountain ranges, and through well-watered valleys, bisecting families, clans and tribes, delineated modern states that corresponded, to historical entities: Mesopotamia-Iraq, Syria-Lebanon, Palestine-Jordan.

Although post first World War boundaries served the colonial powers, Iraqis, Syrians, Lebanese, Jordanians, and Palestinians – the Arabs directly affected by the carve-up – had intimate attachments to the territories they inhabited and were – and are – prepared to defend them.

Borders not only determined national identity but also created interests and institutions. And, since the 20th century was an age of nationalism, nationality became a primary factor in the identities of individuals, communities and societies. Today Arabs need passports or identity documents and even visas to travel around a region united under the Ottomans.

State-forged efforts to transcend national borders mounted by pan-Arab nationalists have failed, the most serious being the United Arab Republic established by Syria and Egypt in 1958, from which Syria seceded in 1961.

Transnational Muslim fundamentalists are also doomed to fail because they cannot transcend national identities. The Syrian city of Raqqa is a case in point. For a year, Raqqa has been ruled by the radical Islamic State in Iraq and Syria (Isis) led by Iraqis and Saudis who lord it over Tunisian, Egyptian, Chechen and Syrian fighters, as well as residents who have fled the foreign Isis and its harsh social and religious impositions alien to more moderate Syrians.