At least 500 reported killed in Aleppo province this month 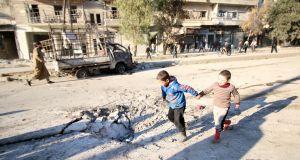 At least 500 people have been killed during fighting in Aleppo province since the start of a Syrian army and allied forces offensive began in early February, a war monitor said on Wednesday.

The Syrian Observatory for Human Rights, which monitors the war, said this figure included at least 100 civilians.

The Syrian army, supported by Russian air strikes, began a push to retake Aleppo and surrounding areas up to the Turkish border at the start of February.

Russia’s Foreign Ministry has rejected American allegations that Russian bombing had caused a humanitarian crisis in Syria, saying it is the West that fuelled the problem.

Moscow views US allegations that it uses unguided munitions in Syria as “totally unfounded”, Russian Foreign Ministry spokeswoman Maria Zakharova told a news briefing. She also rejected as unfounded criticism that Russian bombings in Syria were pushing refugees towards Europe.

Meanwhile, one Turkish soldier was killed and another wounded when security forces clashed with Kurdish militants crossing from the Syrian border, the army said on Wednesday, hours after Ankara summoned the US ambassador over Washington’s support for Syrian Kurds.

The latest clash could add to Turkish frustrations with its NATO ally. Washington supports the PYD Syrian Kurds in the battle against Islamic State in Syria. Ankara sees the fighters as terrorists, citing their links to the Kurdistan Workers Party (PKK), which has carried out a violent, three-decade insurgency for Kurdish autonomy in Turkey’s southeast.

As well as battling both a Kurdish insurgency and Islamic State, Turkey has been grappling with an influx of more than 2.5 million refugees since the start of the Syrian civil war.

Separately, military sources said the army seized up to 15 kg of explosives and four suicide-bomber vests when it detained 34 people trying to cross into Turkey from an area in Syria under Islamic State control. It has announced such seizures in the past.

Turkish soldiers spotted seven PKK militants entering Sirnak province’s Cizre district from Syria on Tuesday evening and, as they clashed, one soldier was killed and one wounded, the Turkish armed forces said.

The area of Syria near where the soldiers clashed is controlled by the Kurdish Democratic Union Party (PYD). Tensions between Ankara and Washington flared up again over the PYD after State Department Spokesman John Kirby said on Monday the United States did not regard the group as a terrorist organisation.

In response, Ankara summoned the US ambassador to express its displeasure.

Turkish Foreign Minister Mevlut Cavusoglu said on Tuesday that the United States’ refusal to label the PYD as terrorists, while applying that label to the PKK was unacceptable.

“If you’re putting one of them on your terror list, and ignoring the other, that’s naive to say the least – and unacceptable,” Cavusoglu said while on an official visit to Hungary.

Turkey fears that the advances by Syrian Kurds against Islamic State on its 900km border with Syria will fuel separatist ambitions among its own Kurds.

It has been conducting a violent crackdown on the PKK in the southeast, with hundred of militants, security force members and civilians killed as the military tries to force the PKK out of towns and cities across the region.