At least 11 dead after two car bomb blasts in Iraq 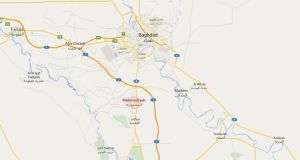 A car exploded in a commercial area in the town of Mahmoudiyah, about 20 miles (30km) south of Baghdad.

At least 11 civilians have been killed in two car bomb attacks in and around the Iraqi capital, officials said.

Seven people were killed when an explosives-laden car was detonated in a commercial area in the town of Mahmoudiyah, about 20 miles (30km) south of Baghdad, a police officer said.

The vehicle was parked near a bakery in a mainly Shiite part of the town and went off as people were queuing to buy bread.

Another 13 civilians were wounded in the attack, he said.

Hours later, another car bomb exploded in a car park outside Yarmouk hospital in western Baghdad, killing four civilians and injuring 10 others, the official said.

The bombings came a day after attacks in and around Baghdad killed at least 15 civilians.

There was no immediate claim of responsibility for the bombings but the Islamic State group and other Sunni extremists carry out near-daily attacks targeting Iraq’s security forces and Shiite majority.