War of words highlights disagreements between US, Iraq and Iran over how to combat IS as months of air strikes have failed to check its advances 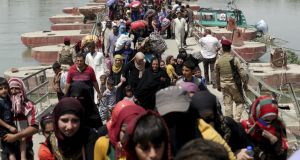 Displaced Sunni people fleeing the violence in Ramadi on the outskirts of Baghdad. Iraqi forces recaptured territory from advancing IS militants near the recently-fallen city of Ramadi on Sunday. Photograph: Reuters/Stringer

Rival powers and allies have traded barbs and accusations over the recent successes of Islamic State, a week after the militant group seized Ramadi in Iraq and Palmyra in Syria, amid warnings that it may execute hundreds of hostages captured in its latest battles.

The war of words highlighted disagreements between the US, Iraq and Iran over how to combat IS. Months of air strikes have failed to check its advances.

Qassem Soleimani, the commander of Iran’s Quds Force, said the US lacked the will to fight Islamic State.

“Today, there is nobody in confrontation with [Islamic State] except the Islamic Republic of Iran, as well as nations who are next to Iran or supported by Iran,” Mr Soleimani told a daily newspaper, Javan, on Monday.

He said US fighter jets had done nothing to halt the IS advance on Ramadi, and said the US was complicit in the group’s expansion.

Mr Soleimani’s comments came a day after US defence secretary Ashton Carter told CNN that Iraqi forces had shown “no will to fight” the jihadist group and had fled in Ramadi despite outnumbering the militants.

A spokesman for the Iraqi prime minister, Haider al-Abadi, told the Associated Press Mr Carter had been given “incorrect information” before speaking to CNN.

On Monday, however, the most senior British military officer to be involved in postwar planning in Iraq, Maj Gen Tim Cross, said the Iraqi army lacked the necessary “moral cohesion” to fight against IS.

Last week, the militant group seized the capital of the predominantly Sunni Anbar province, its greatest victory in Iraq since its conquest of Mosul last summer and its declaration of a caliphate spanning swaths of Iraq and Syria.