Aleppo could be destroyed by Christmas, warns UN envoy

Staffan de Mistura says writing on the wall for ‘another Srebrenica, another Rwanda’ 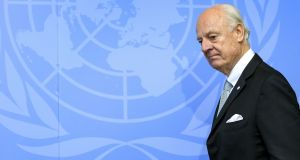 Staffan de Mistura: The UN’s special envoy to Syria said he was willing to go personally to eastern Aleppo to escort rebel fighters out of the city. Photograph: Fabrice Coffrini/AFP/Getty Images

The entire rebel-held section of eastern Aleppo could be destroyed by Christmas if the “cruel, constant” Russian- backed bombing of the Syrian city continues, the UN special envoy for Syria has warned.

In a passionate personal appeal from Geneva on Thursday, Staffan de Mistura said the scale of human tragedy in the besieged part of the city was huge, and the world needed to avert “another Srebrenica, another Rwanda”.

He said he was willing to go personally to eastern Aleppo to escort up to 1,000 Islamist fighters out of the city if it would mean a halt to the bombardment by Russian and Syrian forces.

History would judge Syria and Russia harshly, Mr de Mistura added, if they used the presence of about 900 former Jabhat al-Nusra fighters as an “easy alibi” to destroy the besieged area and kill thousands of the 275,000 citizens – 100,000 of them children.

“The bottom line is, in a maximum of two months, two and a half months, the city of eastern Aleppo at this rate may be totally destroyed, and thousands of Syrian civilians, not terrorists, will be killed, many wounded and thousands will be refugees seeking to escape,” he said.

In a question directed at the Kremlin, Mr de Mistura asked: “Are you really ready to continue this level of fighting and de facto destroy the whole of the ancient city?”

He also aimed his message at al-Nusra, now known as Jabhat Fatah al-Sham, saying it was “deciding the destiny of 275,0000 civilians” by refusing to leave the city.

Mr de Mistura said his personal presence would be a guarantee of their safety, saying all he could offer was his own body.

The UN humanitarian adviser, Jan Egeland, said at least 376 people had been killed and 1,266 wounded in the past two weeks in Aleppo. Mr de Mistura said that two hospitals had been destroyed and a 600 patients were in need of medical evacuation.

The remarks came as Syrian government forces reportedly advanced against rebels inside Aleppo, making their biggest gains in the city in years.

The Syrian Observatory for Human Rights said loyalist fighters now controlled about half of the Bustan al-Basha district near the centre of the divided metropolis.

Still, he insisted that the International Syria Support group, a wider group of countries trying to reach a ceasefire, including its UN-backed humanitarian task force, should not be disbanded.

French foreign minister Jean-Marc Ayrault was in Moscow on Thursday to canvass support for a fresh UN resolution banning flights over Aleppo, the resumption of humanitarian aid, and a surveillance mechanism to oversee truce violations and public international law.

His chances of success are deemed slim. The US and the Russia have suspended discussions on a ceasefire as each side accused the other of bad faith.