‘You can’t imagine what it’s like living in Aleppo right now. It feels like we are living in hell’ 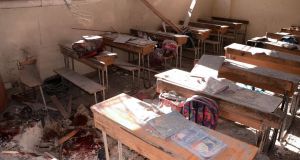 An image shows a pool of blood and damage tp a classroom after it was reportedly hit by rebel rocket fire in the Furqan neighbourhood of the government-held side of west Aleppo, on Sunday. Photograph: George Ourfalian/AFP/Getty Images 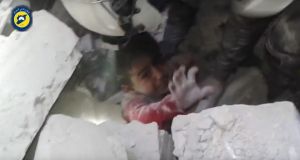 A handout frame grab from video footage released on November 17th by the Syrian Civil Defence, also known as the White Helmets, showing rescuers trying to pull out a child trapped under the rubbles of a building in the rebel-held Maadi neighbourhood of east Aleppo. Photograph: EPA/White Helmets 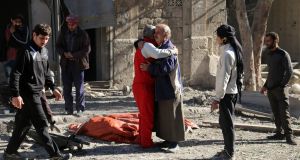 The remaining hospitals on the rebel-held side of Aleppo have been badly damaged and forced to stop providing care amid an intensifying bombardment, according to the World Health Organisation.

Bombs launched by the Syrian government over the weekend seriously damaged two general hospitals that were providing trauma care in the war zone and hit the only children’s hospital, according to doctors, nurses and residents.

The destruction left more than 250,000 people in eastern Aleppo without hospital care, the WHO said. It is unclear if the hospitals will be able to reopen.

“Although some health services are still available through small clinics, residents no longer have access to trauma care, major surgeries, and other consultations for serious health conditions,” the health organisation said in a statement on Sunday.

Dr Omar, the last neurosurgeon in eastern Aleppo, who declined to provide his full name out of fear for his safety, sounded desperate when reached at the height of the bombing Friday.

“We no longer have hospitals to operate in,” he said. “You can’t imagine what it’s like living in Aleppo right now. It feels like we are living in hell. Our neighbourhoods are in flames, and bombs are raining down from the sky. We urgently call on the international community to send help.”

Humanitarian agencies have described the attacks on healthcare facilities as deliberate. The rebel-held area of the city is surrounded by government forces and has run out of most food rations, medicines, bandages and fuel and has little water.

“The regime is trying to cut off the city,” said Abu Roma, who uses a nom de guerre and is a rebel commander with the Zinki group, which opposes Syria’s president Bashar al-Assad. “I would say the worst scenario is that we will be martyrs,” he said, referring to all those remaining in the rebel-held area.

Aleppo, the country’s largest city, has been divided since 2012, but the situation became markedly worse over the summer. In recent weeks, there had been a respite from air strikes on rebel-held districts, but that ended last week.

Now it appears to both those fighting and civilians that the Syrian government has resolved to press forward regardless of the humanitarian cost, and to gamble that Western countries, particularly the United States, will not stop them.

US president Barack Obama has never been keen on military action in Syria, and the incoming president, Donald Trump, is more sympathetic to Russia, which has allied with the Syrian government.

“Aleppo is the pivot,” said Joost Hiltermann, the Middle East and North Africa programme director for the International Crisis Group. Although the government might like to reclaim all of the areas of Syria that it has lost control of, Russia and Iran, another ally, are less interested, Mr Hiltermann said.

“But, they all agree on Aleppo; it is too big to let go, and the interregnum in the United States is a good chance to press their advantage,” he said.

As always in the long-running Syria conflict, the sheer numbers of dead and wounded and the scale of the misery and destruction fast eclipses what is imaginable, and each individual story recedes. But the snapshots from the past few days in rebel-held Aleppo have been deeply disturbing.

A video circulating on social media, which was taken by Al-Jazeera during the bombing at the children’s hospital, showed children being treated with oxygen masks after an alleged chlorine gas attack elsewhere in the city.

The Al-Jazeera team captured footage of nurses taking premature infants, whom they could balance in one hand, out of incubators as clouds of dust from the bombing rose around them. One nurse hugged another as they held tiny infants in their arms. The babies were carried to a basement shelter and placed together under a blanket.

For now, the only remaining medical services have gone underground or into people’s homes, said Mohamed Kahil, head of the forensic facility in the rebel-held area of the city. “Hospitals have moved to basements, to streets, to houses,” he said. “The medics and staff are still functioning with high energy, but under harsh conditions.”

As the latest fighting took place, Staffan de Mistura, the UN special representative for Syria, travelled to Syria to press his proposal for a suspension of the bombing on all sides and a humanitarian relief effort to help civilians get medical care, food and fuel and to guarantee some sort of safe passage for the insurgents.

Five rebel groups active in and around Aleppo – including the powerful Islamist group Ahrar al-Sham and several groups that receive US support – said in a letter released late on Sunday that they supported Mr de Mistura’s plan.

Wallid al-Moallem, the Syrian foreign minister, who met with Mr de Mistura, claimed to want to help civilians in the rebel-held areas, whom the regime views as “hostages” of the insurgents, according to a report by the Syrian Arab News Agency, which is close to Mr Assad’s government.

However, Mr Moallem dismissed out of hand any suggestion that eastern Aleppo could be self-governing. He said that would be a “reward for the terrorists,” whom he said were still shelling western Aleppo, which is government-held.

Mr Moallem also appeared to reject the idea of a humanitarian pause in the bombing unless there were guarantees “from the countries supporting terrorists,” adding that the UN did not have any guarantees. He was referring to the US and some Arab countries, such as Saudi Arabia, that have backed some of the groups that oppose the government of Mr Assad.

Although groups of fighters said they were prepared to back the UN plan, individual fighters did not sound ready to give up. “We will never get along with the Alawite, we will exterminate them,” Hassan Yaacoub, an independent fighter who is not fighting with any particular faction, said in messages on WhatsApp, referring to the minority Muslim sect of which Mr Assad is a member.

“From now on, I will only talk in sectarian terms. The mask has fallen. Bye, bye Syria, bye bye one Syria; Syria is no more.”