Mary Robinson says 2015 will be crucial year for climate change 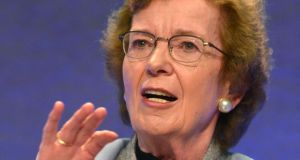 UN Special Envoy for Climate Change Mary Robinson has said that 2015 will be a crucial year for climate change.

She said December’s UN conference in Paris will offer an opportunity to set binding climate targets that will be critical the world’s development goals.

Speaking to The Irish Times on the fringes of the World Economic Forum in Davos, the former President of Ireland said that there needed to be a greater urgency around tackling climate change this year.

“I follow the science very closely. We have very little time left. We are the last generation to be able to do something about climate, and the first generation to understand how serious it is.”

Mrs Robinson participated in a private climate change discussion forum in Davos on Friday alongside businessman Richard Branson and other senior business and civic society leaders. The forum was organised by Bteam, a non-profit initiative which brings together business leaders with a commitment to sustainable development and climate change targets.

Asked about the role business could play in the fight against climate change, Mrs Robinson, who chairs the Mary Robinson Foundation- Climate Justice centre, said that there was already significant buy-in from the business community.

“I think there are a very significant number of business leaders who are way ahead of politicians at the moment in understanding the climate issue, and understanding that you can’t do business in a climate-conflicted world and that’s the way they see it.”

Mrs Robinson also pointed out that the session had been co-chaired by three women - herself, Christiana Figuera from Costa Rica, who is executive secretary of the United Nations Framework Convention on Climate Chang and Nigerian-born Amina J Mohammed, the special advisor to the UN Secretary general on post-2015 development goals. “Women are still not very present in Davos so I think we sent a good signa,” she said.

Climate change has emerged as a major theme on the agenda of the World Economic Forum in Davos in recent years, thanks to the participation of high-profile campaigners such as former US vice-president Al Gore and Matt Damon, who last year addressed the forum on the challenges surrounding the provision of clean water globally.

Speaking at a session on Saturday, Mexican chemist Mario Molina - who won the Nobel Prize for his research on the impact of CFC’s on the ozone layer - said scientists needed to do more to communicate the threat of climate change. Mr Molina also said that corporates should be fined for their emissions.

Tackling climate change also featured in the key-note speech from French president Francois Hollande, who will host the global environment conference at the end of the year. He urged business leaders to contribute to a fund to fight climate change on Friday.

Outlining the impact of increasing CO2 levels on temperature in a key-note address, climate change campaigner and former US vice-president Al Gore, said the average global temperature has increased dramatically in the last decade, giving rise to extreme weather events. “The cumulative amount of man- made global warming pollution now in the atmosphere traps as much extra heat energy every day that would be relied by 400,000 Hiroshima class atomic weapons going off every day,” he said.

He said that 14 of the 15 hottest years measured had been in the first 14 years of the 21st century, with 2014 being the hottest year on record.