Kerry presides over raising of flag at US embassy in Cuba

U.S. Marines hoisted the American flag at the U.S. Embassy in Cuba for the first time in 54 years at a ceremony led by Secretary of State John Kerry marking the restoration of diplomatic relations between Washington and Havana. 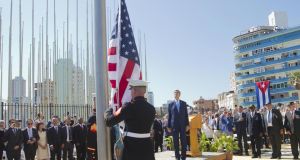 US secretary of state John Kerry stands with dignitaries as a US marine raises the US flag over the newly-reopened embassy in Havana. Photograph: AFP Photo/Pablo Martinez

Watched over by US secretary of state John Kerry, US marines raised the American flag at the embassy in Cuba for the first time in 54 years on Friday, symbolically ushering in an era of renewed diplomatic relations between the two Cold War-era foes.

Three retired marines who last lowered the flag in 1961 participated in the ceremony, handing a new flag to the marine colour guard, which raised it on the grounds outside the embassy building on the Havana seafront.

Mr Kerry, the first US secretary of state to visit Cuba in 70 years, told the ceremony it was obvious that “the road of mutual isolation and estrangement that the United States and Cuba have been travelling is not the right one and that the time has come for us to move in a more promising direction”.

The symbolic event took place eight months after Havana and Washington agreed to restore ties and nearly four weeks after the United States and Cuba formally renewed diplomatic relations and upgraded their diplomatic missions to embassies.

While the Cubans celebrated with a flag-raising in Washington on July 20th, the Americans waited until Mr Kerry could travel to Havana.

Mr Kerry made plain in his remarks that despite the historic opening, Washington has not set aside criticism of Communist-run Cuba’s human rights record. “We remain convinced the people of Cuba would be best served by a genuine democracy, where people are free to choose their leaders,” he said.

Mr Kerry was to meet Cuban dissidents opposed to the island’s one-party political system at the US embassy residence in Havana later on Friday.

However dissidents were not invited to the morning flag-raising in deference to the Cuban government, generating criticism from opponents of US president Barack Obama’s opening to Cuba.

Critics of Mr Obama’s move, which seeks to end decades of US isolation and was announced last December in a landmark agreement with Cuban president Raul Castro, complain the Cuban government has made no concessions in exchange for diplomatic ties.

“It is shameful that on the grounds of our embassy in Havana, the Cuban regime can dictate to the United States government who may or may not attend this ceremony,” Bob Menendez, a Cuban-American senator from New Jersey, said in a statement.

Overnight workers attached a sign reading “Embassy of the United States of America” above the entrance of the building, accompanied by a US seal.

Three classic American cars like those that still ply the streets of Havana were parked on the street behind the podium where Mr Kerry spoke: a 1955 and a 1957 Chevrolet Bel Air and a 1959 Chevrolet Impala, from the year of the revolution that brought Fidel Castro to power.

Fidel Castro handed over power to his brother Raul in 2008 because of poor health.

In last December’s agreement, Mr Obama and Raul Castro announced they would restore diplomatic ties, reopen embassies and work to normalise relations. With ties now restored, there are plenty of hurdles along the way to normal relations between the two neighbours.

Cuba wants the US to end its economic embargo of the island, return the US naval base at Guantanamo Bay in eastern Cuba and halt radio and television signals beamed into Cuba.

The Americans will press Cuba on human rights, the return of fugitives granted asylum and the claims of Americans whose property was nationalised by Fidel Castro’s government.

Mr Obama has defended his move to open up to the Caribbean island saying Washington’s long policy of trying to force change through isolation did not work.

The Democratic president also has used his executive power to relax some US travel and trade restrictions. However the Republican-controlled Congress has resisted his call to end America’s wider economic embargo.