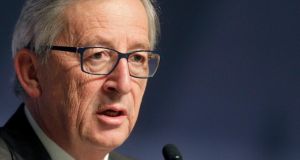 European Commission president Jean-Claude Juncker warned Europe that “it is time now for silence – not yet for action.” Photograph: Reuters

The European Union moved to condemn the terrorist attacks in Paris, but European Commission president Jean-Claude Juncker warned Europe that “it is time now for silence – not yet for action.”

“Europe today is in mourning,” the head of the European Commission said this afternoon in Riga as Latvia began its six-month presidency of the Council of the European Union.

Condemning the terrorist attacks as an “attack against our way of life,” he said that while Europe “needs to react in consequence,” it also needed to “remain calm.”

“In Europe it is time now for silence, not yet for action. One shouldn’t react immediately to such terrorist outrages with new proposals, new initiatives. You can get it wrong by going too far or not going far enough.”

He said the European Commission had already intended to introduce an updated proposal to combat terrorism in the next few weeks.

While a “number of avenues” to combat terrorism were being explored, he said it would be premature to announce any specific measures .

“Combating terrorism is first and foremost a matter for each member state, but of course there has to be links between what the different national authorities are doing to ensure that we can be more effective in fighting terrorism, particularly when it comes to prevention, we need to take a proactive approach.”

Flags flew at half-mast at the European Commission in Brussels, while the European Parliament held a minute’s silence to remember the victims of yesterday’s attacks in Paris which left 12 people dead.

France’s EU Commissioner Pierre Moscovici tweeted: “Today, all Europeans are French, united against an attack on our freedoms and fundamental values #JeSuisCharlie. “

“Press Freedom is a fundamental value of Europe. It is at the very heart of our freedom of thought, our way of life,” she told journalists in Riga.

“The European Union must remain united, not just internally, but also externally, in this fundamental value. Fighting terrorism is a key challenge, but not just in terms of politics and security, but a cultural challenge.

“We have to clearly separate terrorism from Islam. There is not religion which can justify – would justify – such cruel and inhuman behaviour.”

She said that EU foreign ministers would discuss a joint approach to combating terrorism at their next meeting on January 19th.