Judgment of Pope Francis under scrutiny 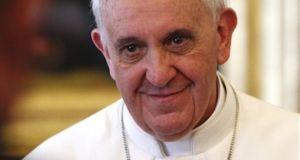 Although the concerns raised in the L’Espresso article about Msgr Battista Ricca seem legitimate, Vatican observers last night suggested the report might be intended as a Curia shot across the bows of the reform-minded Pope Francis.

On the eve of the departure of Pope Francis this morning for the week-long World Youth Day celebrations in Brazil, Italian weekly news magazine L’Espresso suggested he has just made the first serious error of his pontificate.

The report claims he recently and unknowingly appointed an actively gay Vatican monsignor to a senior post in the Vatican bank, IOR.

L’Espresso claims Msgr Battista Ricca (57), who last month was nominated as secretary to the commission of cardinals who oversee the affairs of IOR, has a colourful and well-documented gay past.

Although the concerns raised in the article about Msgr Ricca seem legitimate, Vatican observers last night suggested the report might be intended as a Curia shot across the bows of the reform-minded pope.

L’Espresso claims that in 1999 to 2000, when Msgr Ricca served as pro-nuncio in Uruguay, he had a “ménage à deux” in the Vatican nunciature with his then lover, Swiss army captain Patrick Haari. It also claims he was involved in a brawl at a gay bar in 2001.

In the same year, he was involved in an embarrassing incident when he got stuck in the lift in the nunciature. When firefighters opened it, they found that Msgr Ricca was in the company of “a young man well known to the police”.

In the end, the new full-time nuncio to Uruguay, Polish bishop Janusz Bolonek, appealed to Rome for the removal of Msgr Ricca. He was transferred to the Trinidad and Tobago embassy before returning to Rome in 2005.

According to L’Espresso, Capt Haari allegedly left a trunk containing his belongings in the Uruguay nunciature. It was later found to contain a gun, condoms and pornographic material.

A senior Vatican spokesman described the L’Espresso report as “unreliable”.

Some commentators wonder if details of Msgr Ricca’s past were deliberately omitted by Curia advisers to trip up the reform-minded Pope Francis.