Akihito will be the first Emperor to abdicate in more than 200 years, since Emperor Kokaku stepped down in 1817 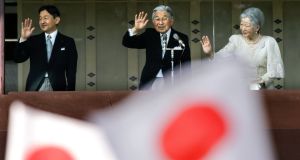 The emperor of Japan will step down on April 30, 2019, the first abdication by a Japanese monarch in two centuries, Prime Minister Shinzo Abe said on Friday.

Emperor Akihito, 83, said last year that he planned to step down before his death, and Friday’s announcement set the date. The emperor had been a godlike figure in Japan before the end of World War II. When Emperor Hirohito announced Japan’s surrender over the radio on August 15th 1945, it was the first time average citizens had heard his voice. The American victors stripped the Chrysanthemum Throne of all political power.

Akihito, Hirohito’s eldest son, has a strictly ceremonial role but is a respected and popular figure in Japan. Japan’s parliament passed a law in June that allows the emperor to retire, and proposed considering allowing the position to be passed to a female descendant.

Akihito’s retirement would allow his eldest son, Crown Prince Naruhito, 57, to succeed him. Emperor Kokaku, who stepped down in 1817, was the last emperor to abdicate.

Some experts, recalling past examples when ex-emperors kept their influence, had feared the former monarch’s existence would undercut the symbolic status of his heir, Crown Prince Naruhito.

“The emperor all along has intended to pass all his public duties including state acts to the next emperor,” Naruhito’s younger brother, Prince Akishino, said in remarks published to mark his 52nd birthday on Thursday.

“Even if there are concerns about ‘dual authority’, if that expression is appropriate, I can clearly say that it is impossible,” he added.

Akihito, who has had heart surgery and treatment for prostate cancer, said in rare remarks last year that he feared age might make it hard to fulfill his duties.

Akishino, who is next in line to the throne after the 57-year-old Naruhito, said he wanted his father to rest after retiring.

“I hope the emperor will spend relaxing time as much as possible after the abdication,” he said.

Akishino said he was willing to take on the crown prince’s duties as much as possible after Naruhito ascends the throne but would need to consult his older brother.

“This is unprecedented, so there are many things I can not imagine,” he said.

Akishino’s 11-year-old son, Prince Hisahito, is the emperor’s only grandson and will be second in line to the throne after the abdication. Naruhito’s daughter, Princess Aiko, who turns 16 on Friday, cannot inherit the males-only throne. - Reuters

1 Dig for remains of Red Hugh O’Donnell finds skull and coffins
2 Miriam Lord: Leo’s Phoenix pecs just a storm in a bag of cans
3 ‘I will be alone for rest of my life,’ says woman raped as she slept
4 Archaeologists are ‘quite sure’ they have found Red Hugh O’Donnell’s burial place
5 Leaving Cert: Teachers advised to ‘destroy’ documents relating to students’ grades
Real news has value SUBSCRIBE