Irishman appointed as new EU ambassador to US 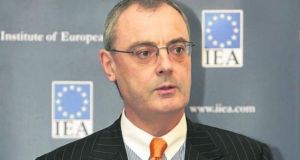 Irishman David O’Sullivan (61) will take up a four-year post as EU ambassador to the United States in September.

Irishman David O’Sullivan has been appointed as the next EU ambassador to the United States.

Mr O’Sullivan will take up the four-year position in September, leaving his current position as chief operating officer of the EU’s foreign affairs wing, the European External Action Service (EEAS)

The appointment of an Irish candidate to the position comes less than five years after former Taoiseach John Bruton completed his term as the EU’s ambassador to Washington.

“I am delighted to announce the appointment of David O’Sullivan to this key job in the European External Action Service,” the EU’s high representative for foreign affairs said in a statement this morning.

“David’s well-known talent, energy and expertise continue to be significant assets for the EU’s external action and make him the ideal candidate to take forward the European Union’s work in Washington DC.”

A graduate of Trinity College Dublin, Mr O’Sullivan began his career in the European Union in 1979, moving swiftly up the ranks to become secretary general of the European Commission under Romano Prodi.

In late 2005 he stepped down as the EU’s highest-ranking civil servant and was replaced by Irish woman Catherine Day, taking up a position as director general of the European Commission’s trade division.

Mr O’Sullivan’s experience in EU foreign affairs and trade will be perceived as key attributes as he takes up his role.

Ongoing negotiations between the EU and the US on a trade agreement are likely to dominate transatlantic relations in the coming years, while the crisis in Ukraine has pushed the question of EU-US co-operation, and particularly the role of NATO, into the spotlight.