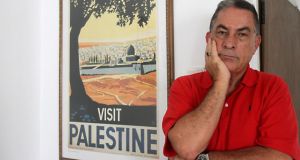 Haaretz newspaper columnist Gideon Levy: “In the West Bank, you see the real face of the Israel Defence Forces, the so-called most moral army in the world.” Photograph: Gil Cohen Magen/AFP/Getty Images

Gideon Levy is preaching in the wilderness. Week after week, the columnist for Haaretz newspaper tells his compatriots what they do not want to hear: that the siege of Gaza and the occupation of the West Bank are immoral and counter-productive; that the continued seizure of Palestinian land and the construction of settlements is a “criminal enterprise” intended to foil any chance for peace.

“What Israeli interest does it serve to put two million people in a cage?” Levy asks. “Tens of thousands of Palestinian children will never forget what Israel has done to them and their parents in this [July 8th-August 26th] war. That is something Israel should have taken into account: another generation of hatred like never before, and very justified hatred.”

Levy is grateful to Amos Schocken, the third-generation owner of Haaretz, for standing by him. Some 2,000 readers cancelled subscriptions because of his July 14th column criticising Israeli air force pilots who bombed Gaza. “They have never seen an enemy plane coming toward them,” Levy wrote. “They never saw the whites of the eyes and the red blood of their victims . . . They are heroes battling the weakest, most helpless people . . .”

Israeli leaders portray their war on Hamas as a fight against terrorism. “Any Palestinian terrorist would rather sit in an Apache helicopter or an F16 and fly over Tel Aviv and push a button to bomb civilians,” Levy replies. “Nobody would call it terrorism. Terror is always the weapon of the weak.”

During the war, Levy was threatened, heckled and spat upon. Haaretz hired bodyguards to protect him. Yariv Levin, the leader of the Likud Yisrael Beiteinu coalition in the Knesset, said he should be tried for treason, which carries the death penalty in time of war.

“Nobody condemned Levin,” Levy says. “That tells you a lot about Israeli democracy.” Israel’s supporters boast that it is “the only democracy in the Middle East”.

Opinion polls showed that up to 95 per cent of Israelis supported the assault on Gaza. While attention focused on Gaza, the Israel Defence Forces killed 20 adults and three children in the West Bank, mostly during demonstrations against the war in Gaza. Israeli soldiers wounded 2,218 people, 38 per cent of them with live fire.

“In the West Bank, you see the real face of the IDF, the so-called most moral army in the world,” Levy says. “You can’t claim those soldiers’ lives were in danger. You can’t claim there were tunnels and rockets and terrorists. But look how they killed.”

During the first intifada (1987-1993), a Palestinian woman who tried to reach a maternity hospital in East Jerusalem was turned round at three Israeli checkpoints, and gave birth in a car. “It was cold and stormy,” Levy recalls. “She begged the soldiers to take the baby to hospital. They refused. Eventually, she carried the baby, and it died.” The incident marked a turning point for Levy. “I could believe there were bad soldiers at one checkpoint. But three? I realised their inhumanity was not an exception, but deeply rooted policy. Ninety nine per cent of Israelis do not see Palestinians as human beings like themselves.”

Impunity is a huge problem, Levy says. “Soldiers know that nothing will happen to them if they kill a 10-year-old child like a cockroach.”

Israeli officials invariably announce they are investigating. “It’s a joke,” says Levy. “A way of buying time until people forget. Nobody takes it seriously. The army investigates itself? You have to have a sense of humour.”

On a national level, “Golda Meir said that after the Holocaust, Jews have the right to do anything they want,” Levy continues. “The Holocaust makes Israelis think international law doesn’t apply to them, because they are the ultimate victims of history; the only victims.”

Israel killed more than 1,400 Palestinians in Gaza in December 2008-January 2009. “I was sure that Israel would never dare do it again,” Levy says. “That the international community would not let them do it again. But this time, it was even more brutal. Israel feels, rightly, that no one will stop it. They believe the only language Arabs understand is the language of force. It never works.”

Levy believes a “two-state solution” has become impossible, because 700,000 settlers are the most powerful force in Israeli politics. Israel and the West Bank “are already one state with two regimes,” he says. Opponents of a single state for Israelis and Palestinians say Israel would lose its Jewish character. “Where were you all those years when you could have saved the Jewish state by going for a two-state solution?” he asks. “We’ve missed that train. The struggle now should be for equal rights for Palestinians in one state.”

Westerners should support the “Boycott, Divestment and Sanctions” campaign, he argues, “because there won’t be a change from within, because Israel will not be punished for the occupation, because in South Africa it was very effective . . . It’s the only way to shake Israelis out of their blindness and indifference.”

Levy’s parents emigrated from the Sudetenland and Czechoslovakia in 1939. He has lived his entire life in Tel Aviv. “I am very attached to this place. I struggle to make it more just, unsuccessfully, but the struggle has some meaning for me.”