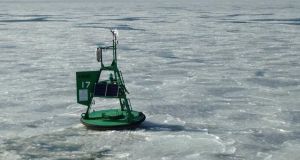 Temperature buoy, Nantucket Sound. Once recordings are adjusted to compensate for problems in the way temperatures were measured, a perceived global warming slowdown largely disappears. Photograph: National Oceanic and Atmospheric Administration via The New York Times

Global warming has not undergone a “pause” or “hiatus”, according to US government research that undermines one of the key arguments used by sceptics to question climate science.

The new study reassessed the National Oceanic and Atmospheric Administration’s (Noaa) temperature record to account for changing methods of measuring the global surface temperature over the past century.

The adjustments to the data were slight, but removed a flattening of the graph this century that has lead climate sceptics to claim the rise in global temperatures had stopped.

Dr Gavin Schmidt, a climatologist and the director of Nasa’s Goddard Institute for Space Studies said: “The fact that such small changes to the analysis make the difference between a hiatus or not merely underlines how fragile a concept it was in the first place.”

In 2013, the UN’s most comprehensive report on climate science made a tentative observation that the years since 1998 had seen a “much smaller increasing trend” than the preceding half century. The results highlighted the inadequacy of using the global mean surface temperature as the primary yardstick for climate change.

Dr Karl said: “There’s been a lot of work done trying to understand the so-called hiatus and understand where is this missing heat.” A series of studies have since identified a number of factors, including heat transferred into deep oceans and small volcanic eruptions, that affected the temperature at the surface of the Earth.

“Those studies are all quite valid and what they suggest is had those factors not occurred the warming rate would even be greater than what we report,” said Dr Karl.