Tánaiste to push for greater focus on links between climate change, hunger and poor nutrition 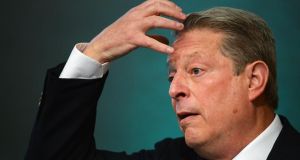 
Ireland will push for a greater focus on the links between climate change, hunger and poor nutrition at international gatherings including the UN General Assembly and the forthcoming G8 summit in Fermanagh, Tánaiste and Minister for Foreign Affairs and Trade Eamon Gilmore said yesterday.

Mr Gilmore was speaking at the close of a conference, hosted by the Government and the Mary Robinson Foundation – Climate Justice, and organised with the World Food Programme (WFP) as part of Ireland’s EU presidency, which examined the overlap between climate change, hunger and under-nutrition and its impact on the world’s most vulnerable populations.

“Ireland will keep the fight against hunger at the heart of our foreign policy,” Mr Gilmore said, adding that the Government would advocate for a “single set of measurable goals” to be put in place after 2015, the deadline set when the UN’s Millennium Development Goals (MDGs) were first launched. Progress on achieving the MDGs has fallen far short of what was initially hoped for.

Mr Gilmore said any post-2015 goals must “be grounded in the reality of the lives of those most affected” by changing weather patterns. “They must bring together, in bold and specific terms, targets to end poverty and hunger and protect our environment. They need to be global goals, and there needs to be a clear commitment to implement them at national level,” he said.

More than 350 delegates from 60 countries attended the two-day event at Dublin Castle which sought to bring together leaders, policymakers and almost 100 representatives from communities at the frontline of climate change. Ireland’s former president Mary Robinson said it was shameful that efforts to address hunger and poor nutrition had been slow. “Business as usual is not an adequate response because of the urgency of the situation,” she added.

Mrs Robinson argued that tapping the knowledge and experience of those most affected, as had happened during the conference, was key to tackling the problem. “We need to change our policies and make these people central to that,” she said. “Those least responsible [for climate change] are the most affected.”

Attendees and speakers at the conference included former US vice-president Al Gore, who praised Ireland as a “world leader” in tackling hunger and poor nutrition.

The Government signed a three-year partnership deal with the World Food Programme on the sidelines of the conference. The agreement sets out shared objectives in the area of humanitarian assistance, as well as committing Ireland to providing a minimum of €7 million a year to WFP for the next three years.