World leaders turn up in Paris to express solidarity 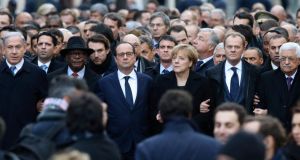 World leaders linked arms as they led more than 1.5 million people in a silent march through Paris in tribute to the victims of last week’s attacks and in defence of freedom of expression.

A sea of people fanned out in all directions from Place de la République, where French president François Hollande and more than 50 heads of state and government led the procession towards Place de la Nation.

Police said the turnout was “unprecedented” but too large to count. Marches also took place in towns and cities across France, including in Lyon, Marseille and Bordeaux, bringing turnout nationwide to 3.7 million, according to a tally by the interior ministry.

The crowd in Paris was so large that waves of demonstrators were still passing the starting point three hours after the march set off. They walked in silence, occasionally breaking out in applause or singing La Marseillaise.

“Today, Paris is the capital of the world,” Mr Hollande said.

He was joined in the front row by the leaders of Germany, Italy, Israel, Turkey and the Palestinian territories. Ireland was represented by Taoiseach Enda Kenny, who said he had come to “stand in solidarity” with the French people.

Security was stepped up across the city for the day. The authorities deployed 4,300 police, including 150 in plain clothes, as well as 1,350 soldiers. Police snipers could be seen on rooftops.

Public transport was free for the day, but metro stations near the route were closed down.

Seventeen people, including journalists and police, were killed in three days of violence that began with a shooting attack on Charlie Hebdo magazine. It ended on Friday with a hostage-taking at a Jewish supermarket in which four hostages and the gunman were killed.

The killings have shaken France and prompted an outpouring of revulsion and horror. All week, huge crowds have turned out for rallies and vigils in solidarity with the dead and in support of France’s republican ideals.

Overnight, an illuminated sign on the Arc de Triomphe read: Paris est Charlie, adopting a mantra that has become a national slogan.

German chancellor Angela Merkel, Italian prime minister Matteo Renzi and Mariano Rajoy of Spain were among the foreign leaders marching with Mr Hollande. UN secretary-general Ban Ki-moon, Israel’s Binyamin Netanyahu and Palestinian president Mahmoud Abbas were also present, as were the leaders of Turkey, Jordan and Ukraine. The United States was represented by its ambassador to France, and Russia by its foreign minister, Sergei Lavrov.

After his fellow leaders left the march, Mr Hollande stayed to greet survivors of the Charlie Hebdo attack and their families. He later joined Mr Netanyahu for prayers at Paris’s main synagogue.

On the eve of the march, prime minister Manuel Valls said it would be “an unprecedented demonstration” that would be “written in the history books. “It must show the power and dignity of the French people, who will cry out their love of liberty and tolerance,” he said.

Figures from across the political spectrum in France joined the rally, including former president Nicolas Sarkozy, nine former prime ministers and representatives of left and right.

Speaking after a meeting with European counterparts in Paris before the march, interior minister Bernard Cazeneuve said the EU would tighten border controls and improve the exchange of information within the bloc to combat the threat of Islamist terrorism.

He said the ministers agreed to do more to address the flow of foreign fighters between Europe and Syria and Iraq.

Hours before the march, a video emerged featuring a man resembling the gunman killed in the kosher supermarket, Amedi Coulibaly. He pledged allegiance to the Islamic State and urged French Muslims to follow his example.