Visa-free EU travel for Turkish citizens has hard road ahead

Controversial promise to Ankara was always going to meet opposition 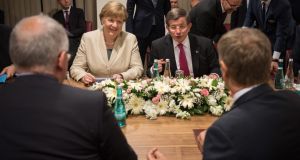 The announcement by the European Commission that it has provisionally backed visa-free travel for Turkish citizens marks the latest stage in the EU’s engagement with its eastern neighbour.

It is six months since EU leaders first considered a joint response with Turkey as a way of solving the refugee crisis, and negotiations have been under way to offer Ankara concessions in exchange for Turkey re-admitting refugees.

As part of the deal formalised in March, the EU offered Ankara €6 billion in funding, a pledge to advance EU membership negotiations which have been under way since 2005 and a commitment to consider visa-free travel for Turkish citizens. In exchange, Turkey agreed to take back refugees who have travelled to Greece via Turkey.

EU-Turkish relations – and the prospect that Turkey will one day become a member state – has long been one of the most controversial aspects of EU politics.

The refugee crisis has brought the issue to the forefront. Having relegated Turkish accession talks to the bottom of its priority list, Brussels re-engaged with the country last year as it sought to find a solution to an unprecedented refugee crisis which saw more than one million undocumented migrants reach European shores last year.

While the commission said yesterday that Turkey was on track to qualify for visa-free travel by June, five of the 72 “benchmarks” still need to be met.

Unsurprisingly the outstanding issues are the most tricky, including a revision of the country’s law on terrorism, anti-corruption measures and judicial issues.

Whether there is political will from the Turkish government to enforce such changes is one issue. Another concerns the political willingness of EU member states and the European Parliament to embrace visa-free travel for Turkey. Some national capitals are already alarmed at the prospect of granting visa-free access to 79 million Turkish citizens.

With elections due next year in France and Germany, the political establishments in both countries will be loath to give any fresh fodder to Eurosceptic parties running on an anti-immigration platform.

Already the National Front’s Marine Le Pen has accused Germany’s chancellor Angela Merkel of “treason” for pursuing an agreement with Turkey’s president Tayyip Erdogan, reiterating her view that Turkey is not a European country “historically, culturally or geographically”.

Thus, for the more cynical EU watchers, yesterday’s endorsement by the commission is a classic example of EU equivocation. It is precisely because many member states believe Turkey will never reach the objective criteria to qualify for visa liberalisation that they endorsed the idea in principle at the March EU-Turkey summit.

The glacial pace of EU decision-making also means that the commission could make a positive recommendation in the knowledge that the proposal has to jump through many more hoops before it becomes reality.

But such a reading fails to give due account to the importance of the issue from the Turkish perspective. There is huge public pressure on the Turkish government to secure the coveted prize of visa-free access for its citizens.

This applies not only to tourists, but to working professionals who need a visa in order to attend a conference or work-related meeting. Turkey is also aggrieved at the fact that citizens of other would-be EU members such as Albania and Bosnia face no such visa restrictions.

Amid reports this week from Ankara of serious tensions between Erdogan and his prime minister Ahmet Davutoglu, it is clear that Davutoglu in particular has staked a lot on the promise of visa-free travel for the country.

While the EU may be holding the carrot of visa liberalisation, the threat that Turkey could always pull out of the EU-Turkey deal hangs over the discussions.

Yesterday’s announcement may have bought the European Union more time in assuring that the country’s path to visa liberalisation remains on track, but tough discussions lie ahead, both at EU member state and European Parliament level.

As long as major concerns about press freedom, rule of law and political diversity in Turkey remain unanswered, the prize of visa-free travel for Turkey may still have some distance to go.