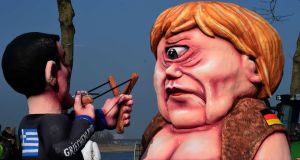 I am very pleased that Germany’s chancellor, Angela Merkel, and Greece’s prime minister, Alexis Tsipras, took my advice about the need for compromise. The two most entrenched hardliners in Europe – on either end of whatever spectrum you choose – moved together as if orchestrated by newspaper columnists, with Nobel laureate Paul Krugman the chief puppeteer.

Nevertheless, a kissy-kissy scenario and swapping family photos isn’t on the agenda yet. Behind whatever smiles they can manage for the photo opportunities, Merkel would dearly love to cut off Tsipras’s feet at the shoulders.

If it were not for a growing sense in southern Europe that the underdogs may still be able to snarl a bit, many in the north (and Ireland) would have no hesitation in killing Greece – or at least the Greece led by Syriza which, Charlie Hebdo says, is “the future of Europe”.

It seemed at one point that the palpable sympathy of most Europeans for the Greek plight would not translate into votes, with several around the euro table determined not to let heart rule head when it came to getting re-elected.

As Krugman has pointed out, austerity policies, which the International Monetary Fund admits were ill-founded, caused such a shrinkage in the Greek economy as to jeopardise any possibility of recovery.

his government is on sale or return. Crying “Wolf!” is no use, if his election promises (of a new vision of the Greek future) are outperformed and negated by the realpolitik of Brussels and Berlin, and his 20-20 vision is severely impaired. He may well accept by now that, as former governor of New York Mario Cuomo put it, you campaign in poetry but govern in prose. If Tsipras had capitulated to Brussels and Berlin he would be facing another election before the end of this year. And that is still on the cards.

Speaking of cards, Greece’s finance minister, Yanis Varoufakis, who taught game theory at Athens University, denies he has been bluffing. “Nothing is farther from the truth,” he said on the eve of the crucial meeting of EU finance ministers. But Varoufakis comes from a Cretan family, and it was a Cretan who famously said: “All Cretans are liars.” If he was speaking the truth he was lying, and if he was lying he was speaking the truth.

Poker wasn’t around when this was first mooted in 600 BC, but when Varoufakis says “It would be pure folly to think of the negotiations as a bargaining game to be won or lost via bluffing”, he was in fact saying the opposite. And that is how he won the last round of talks.

When he insisted there was “a red line beyond which logic and duty prevent us from going”, he wasn’t merely stating Syriza’s ideological bottom line: he was also admitting that although the cards in his hand couldn’t beat a royal flush they could force his euro zone colleagues to show their hand. This he achieved, and they respected him enough to let him into the next round of the game.

Of course Varoufakis was playing the game of his life. Everything in his manner – dress code, body language, approach and withdrawal from the table – proved him the consummate Cretan. And he got what he wanted – what he knew he could achieve, without overplaying his hand. To sit as a neophyte at that table with the big boys (including a scornful Michael Noonan) was to play the Cincinnati Kid against Edward G Robinson, but this time he won.

To change the analogy, if an Indian a

rmy officer couldn’t pay his mess bills, his fellow officers gave him a revolver and told him to do “the honourable thing”. Tsipras and Varoufakis walked out of their meetings with their fellow officers, holding the gun but with no intention of doing anything honourable other than abiding by as many of their election promises they knew they could afford to keep.

Tsipras returned home cautiously claiming: “We won the battle, not the war. The difficulties lie ahead of us.” Influential figures such as the German finance minister Wolfgang Schäuble are not helping anyone by suggesting Greece won’t be able to deliver on the essential reforms. The simple fact, as Krugman repeatedly emphasises, is that if Greece cannot pay all its debts there’s no future in insisting it should do so.

Noonan, too, doesn’t help when he so clearly relishes his rehabilitation on the good-boy side of the table, adopting an unseemly attitude to Varoufakis, comparing him to a “celebrity economist, good in theory but not very good in practice”. I think Varoufakis will prove to be a better player than Noonan. The next game could be Russian roulette.

Smiles don’t cost anything but they don’t come cheap. Handshakes and hugs, as we know from Northern Ireland, take a little time.