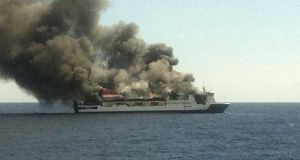 A handout picture provided by one of the 152 passengers evacuated from a ferry travelling between Palma, Majorca and Valencia after it caught fire. Photograph: EPA

A ferry heading from the Mediterranean island city of Palma, Majorca to the Spanish coastal city Valencia has caught fire at sea, forcing 152 passengers to abandon the ship in lifeboats, Spanish officials said.

Three crew members were injured in the incident.

The fire broke out when the ship was about 27km from Palma, Majorca, Spain’s development ministry said in a statement, with images showing huge plumes of smoke billowing from the vessel.

All of the passengers made it safely into lifeboats and were picked up by another ferry, according to the ministry and port authorities for Spain’s Balearic Islands.

One of the ferry’s five crew members suffered serious injuries, while two other crew members had minor injuries, port authorities said in a statement, without providing further details. They were taken to a hospital in a helicopter.

The ferry transporting the passengers is expected to arrive back in Palma tonight.

The burning ferry is expected to sink. The cause of the fire is under investigation.