US and Russian envoys meet after stormy votes in Ukraine 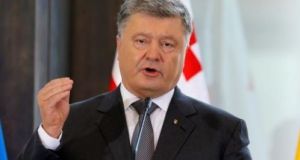 Petro Poroshenko: allies of the Ukrainian president insisted it was vital to show that Ukraine was committed to a political resolution of the conflict. Photograph: Zurab Kurtsikidze/EPA

A top Kremlin envoy for Ukraine has given a positive assessment of talks with his US counterpart in Belgrade, after parliament in Kiev gave preliminary approval to a law officially designating Russia as the aggressor and occupier in the east of the country.

Vladislav Surkov said he agreed with Kurt Volker “that our consultations on a Ukrainian settlement will continue as much as necessary to achieve a result. We have no doubt that there will be a result in the end.”

“The draft United Nations resolution [on the conflict] proposed by Russia was discussed. A common understanding on a range of positions was found. Most disagreements that arose were recognised as surmountable,” he added.

Mr Surkov did not say if they had talked about a US plan to supply high-tech deadly weapons to Ukraine, which is believed to be under White House consideration after receiving support from the US departments of state and defence.

Before Saturday’s talks in the Serbian capital, Mr Volker told Russia’s Gazeta newspaper that he was “prepared to discuss everything that Mr Surkov is ready to, that’s why we are meeting”.

Russia denies arming and leading separatists in a conflict that has killed 10,000 people since 2014, and claims to be acting in good faith to end a war that erupted after Ukraine ousted a Kremlin-backed leader and sought deeper integration with the West.

“There is lots of publicly available information about this, from photographs, including satellite imagery, to social media. Russian servicemen are captured and Ukraine questions them,” Mr Volker said.

“So, the statement that Russia guides and controls the armed forces in eastern Ukraine does not raise any doubts today,” he added.

“It seems to me that Russia went too far with its military presence in Ukraine, establishing control over its territories. And today, that really is an obstacle to the restoration of US-Russian relations.”

The envoys met a day after a stormy debate in Ukraine’s parliament ended with deputies giving approval to two significant Bills on the conflict zone.

They voted to extend by one year a law that would give special status and broad autonomy to eastern regions, once Russian forces and weapons have left and separatist militia are disbanded.

Parliament also gave preliminary backing to a law that for the first time formally describes Russia as the aggressor and occupying power in the east. The Kremlin said such wording was “unacceptable”.

Amid scuffles inside and outside parliament and the release of a smoke bomb in the chamber, some deputies denounced the special status law as a concession to Moscow and the separatists, while allies of President Petro Poroshenko insisted it was vital to show that Ukraine was committed to a political resolution of the conflict.