US and Nato warn Kosovo against plans to form army 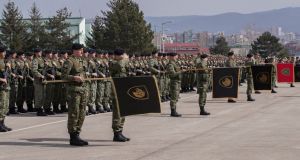 Members of the Kosovo Security Force in Pristina on Monday: President Hashim Thaci announced during the ceremony he would submit a draft law to parliament on transforming the security forces into an army. Photograph: Valdrin Xhemaj/ EPA

The United States and Nato have threatened to reduce co-operation with Kosovo if it pursues plans to turn its security forces into a fully fledged army, in response to what it calls growing danger from neighbouring Serbia and its ally, Russia.

Tension between Serbia and Kosovo has risen in line with the political temperature across the Balkans, where Moscow is playing an increasingly assertive role in states that are moving slowly towards integration with the West.

Kosovo’s parliament has proposed to boost the duties and the firepower of its lightly armed security forces, in effect transforming them into an army while bypassing constitutional changes that the country’s Serb minority would block.

Security is a sensitive issue between Kosovo and Serbia, nine years after the mostly ethnic Albanian country formally declared independence from Belgrade, following a bloody 1998-1999 war that was ended by a Nato bombing campaign.

Kosovar president Hashim Thaci said this week there was “no turning back” from the creation of an army, which he called “a normal step of a sovereign and independent state”.

Mr Thaci said he wanted to create an army according to the constitutional process, but complained that ethnic Serb deputies in Kosovo would always block security reforms on direct orders from Belgrade.

The US is a strong ally of Kosovo, and Nato still has about 4,500 troops stationed in the country, but both quickly urged Mr Thaci to reconsider.

Nato secretary general Jens Stoltenberg spoke to Mr Thaci on Thursday “to convey the serious concerns” of the alliance. “I made clear that unilateral steps such as these are unhelpful, and I urged the Kosovo authorities to remain in close contact with Belgrade,” he said.

If an army is created in the way Mr Thaci proposes, “Nato will have to review its level of commitment, particularly in terms of capacity-building,” Mr Stoltenberg warned.

The US embassy in Pristina said Kosovo’s security forces should develop gradually “in accordance with the Kosovo constitution and through an inclusive and representative political process that reflects Kosovo’s multiethnic democracy.

“Adoption of the current proposed law would force us to re-evaluate our bilateral co-operation with and longstanding assistance to Kosovo’s security forces.”

Belgrade celebrated what it called a show of support from western powers with which it usually clashes on issues involving Kosovo. “When I finished talking with Stoltenberg, I almost cried tears of joy,” said Serbian prime minister Aleksandar Vucic.

“We have worked to change the image of Serbia . . . and today I experienced Stoltenberg saying to me: ‘Thank you, Aleksandar for preserving peace and stability’,” Mr Vucic was quoted as saying by Serbia’s B92 news service.

In January, Serbia said it had been brought to the “brink of conflict” with Pristina by a standoff over the first train service sent by Belgrade to Kosovo in 18 years. The Russian-made train was emblazoned with Serbia’s national colours and the slogan “Kosovo is Serbia” in 21 languages.

Montenegro says Russia was behind an alleged coup attempt last October that was supposedly aimed at killing then prime minister Milo Djukanovic and derailing the country’s Nato accession bid.

Russia, in turn, has accused the West of jeopardising crisis-hit Macedonia’s future by backing an alleged plot to carve out a “greater Albania” in the Balkans. Moscow offered no evidence for the conspiracy, but said Mr Thaci was one of its key players.