Unelected Renzi to grab power in Italy as Letta forced out 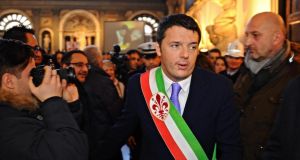 Democratic Party (PD) leader and Florence mayor, Matteo Renzi, during a ceremony at the Palazzo Vecchio in Florence, Italy, today. He is set to become prime minister today when asked to form a government by the president. Photograph: Maurizio Degl’ Innocenti/EPA

A statement from the president’s office not only confirmed Mr Letta’s resignation but it stated consultations on the appointment of his successor will begin immediately.

Appointed prime minister just ten months ago in the wake of an inconclusive February 2013 general election, Mr Letta was effectively hounded out of office yesterday by his own party, the Democratic Party (PD).

A PD meeting voted overwhelmingly, 136-16, to back a proposal from newly-elected party leader, Matteo Renzi, calling for a “new phase” and a “new government”.

It is now widely expected Mr Renzi will be appointed to succeed Mr Letta.

In his comment today, president Napolitano argued that he had no option but to take cognizance of the new situation.

Furthermore, he said that, given that Mr Letta can no longer rely on the support of his own centre-left party in his centre-left, centre-right coalition, there would then be no point in a formal parliamentary resignation.

Opposition forces including Silvio Berlusconi’s Forza Italia and the M5S protest movement had called for Mr Letta to come before parliament to explain himself and to face a confidence vote.

President Napolitano clearly believes that, in the present circumstances, such a vote would be merely a waste of time given that the outcome is not in doubt.

Highlighting the “delicate economic moment being experienced by the country”, the President promised to fulfil his constitutional duties as quickly as possible. Thus his office announced that his formal “consultations” will begin this afternoon when he consults with the Speakers of both houses, prior to consulting with the political parties.

The president also expressed the hope that a “solution” to this crisis can be found as quickly as possible so that an eventual new government can swiftly enact new electoral legislation.

The existing electoral legislation, the “Porcellum” (pig’s arse), enacted by the 2005 Berlusconi government, is widely perceived as one of the causes of the present political instability.

The President’s consultations are expected to be concluded by tomorrow evening which means that a new prime minister, almost certainly Matteo Renzi, could be nominated on Sunday.

The choice of Mr Renzi, however, represents a major gamble since the current Mayor of Florence has had no experience of government at national level nor has he ever been elected to parliament.

Mr Letta’s ten months in office at the head of an unprecedented centre-left, centre-right coalition proved very difficult, with his executive threatened with collapse on an almost daily basis.

At a news conference on Wednesday, Mr Letta joked that such had been the pressure on his government that he had learned to develop a “zen head” to survive and keep on doing his job.