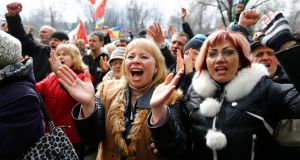 Pro-Russian protesters attend a rally in front of the seized office of the SBU state security service in Luhansk, eastern Ukraine, on Monday. Photograph: Shamil Zhumatov/Reuters

Ukrainians ousted president Viktor Yanukovich in a bid to restore their state to health, but every day seems to reveal new depths to its malaise.

Kiev gave up Crimea without a fight to Russian forces and their local allies, and now the “little green men”, as Ukrainians call them, are infesting the country’s eastern industrial heartland.

Some of the masked gunmen are too well-armed and drilled to be merely the keen volunteers that Moscow claims, but the ease with which these apparent Russian infiltrators are taking control is drawing disaffected locals to their side and exposing the ills of the Ukrainian state.


Weakened military
Changes to Ukraine’s security infrastructure and personnel played into Moscow’s hands, raising questions about the loyalty of Yanukovich and his cronies – the most influential of whom now lambast Kiev’s new government from the safety of Russia.

The reorganisation of military units in Crimea left it almost defenceless against Russia’s annexation, and leading security analyst Dmitry Tymchuk says Moscow’s intelligence services were allowed to develop a large network of agents during the Yanukovich years which is now active in the south and east.

The performance of interior ministry forces in eastern Ukraine has shown they have little sense of loyalty to Kiev or appetite for a fight with pro-Russian gunmen. A police “anti-terrorist operation” in the town of Slavyansk on Sunday achieved nothing, prompting acting president Oleksandr Turchinov to transfer the task to the military – which is itself in disarray and being bolstered by a new volunteer national guard.


Army of ‘sabotage’
Amid reports of police officers in Donetsk region joining pro-Russian protesters, the government urged “patriots” in southern and eastern Ukraine to sign up for new units that could incorporate more than 12,000 men. Turchinov said members of the security services who served under Yanukovich “are unable to defend citizens and sabotage the performance of official functions”.

Yuri Lutsenko, interior minister from 2007 to 2010, claimed yesterday that some of the immense wealth allegedly accumulated by Yanukovich and his allies was and still is used to buy the loyalty of senior police officers across Donetsk – the former president’s homeland – and other southeastern areas.

Kiev has tried to tame some troublesome regions by appointing local “oligarchs” as governors, but with limited success. Key members of Yanukovich’s former party still have great influence in southeastern Ukraine and some – fearing prosecution by the new authorities – are accused of scheming to bring down the government or even split the country.

Poor and demoralised, members of Ukraine’s security services are making a bet on a murky future, and in the southeast many see Russia and its local allies as a better prospect than distant, pro-EU Kiev. And if Ukraine’s security forces cannot be trusted, revolutionary nationalists like Right Sector may step into the breach – providing Russia with a pretext for wider intervention.