Ukraine takes delivery of US missiles despite Russian warning 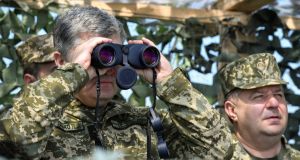 The Ukrainian military plans to start training with powerful US anti-tank missiles on Wednesday following the long-awaited delivery of weapons that Russia warns will only increase bloodshed in eastern Ukraine.

“I am sincerely grateful for the fair decision of [US president] Donald J Trump in support of Ukraine in defence of freedom and democracy. Washington not only fulfilled our joint agreement – it has demonstrated leadership and an important example,” Ukrainian president Petro Poroshenko wrote on Facebook to confirm arrival of the Javelin rockets.

Ukrainian defence minister Stepan Poltorak said the delivery “allows us to move from theoretical to practical work on our assessments of the Javelin, which will start on May 2nd at training bases...and will create a powerful anti-tank reserve”.

The US has strongly supported Ukraine since it ousted pro-Moscow leaders in a 2014 revolution, and sought closer political, economic and military ties with the West.

Russia responded by annexing Crimea and fermenting a separatist conflict in the Donbas region of eastern Ukraine, where more than 10,300 people have died in fighting between government forces and militants armed and guided by Moscow.

Last month, the US confirmed a $47 million (€39m) package of military aid for Ukraine that includes 37 Javelin shoulder-held launchers and 210 missiles.

Ukraine and the US insist they will be used only to repel attacks, but when in December the White House approved Kiev’s long-standing request for deadly “defensive” arms, Russia warned Washington that it was opening a “Pandora’s box”.

Russian deputy foreign minister Grigory Karasin said the US was “essentially getting involved in an internal Ukrainian conflict, again reigniting it and internationalising it”.

“By doing this Washington ‘hawks’ are trying, as they see it, to increase the cost to Russia of the war in Donbas. It is completely mistaken and dangerous logic. It will lead to war, not peace.”

Ruslan Balbek, a Russian deputy from occupied Crimea, on Tuesday called the delivery of the Javelins – which are far more powerful than anti-tank weapons previously used by Kiev’s forces – “a stimulant for Ukrainian aggression”.

“Modern American weapons...could force Ukraine into absolutely unpredictable aggressive actions against both the ‘republics’ of Donbas and the [Crimean] peninsula.”

In dismissing claims that the arms could “provoke” Moscow, the US special envoy to Ukraine, Kurt Volker, has said that “Russia is already in Ukraine, they are already heavily armed, there are more Russian tanks there than in western Europe combined”.

The arrival of the weapons coincides with a change in how Kiev conducts operations in Donbas, four years after the start of the conflict.

Monday marked the end of the so-called anti-terrorist operation, which was run by Ukraine’s security services, and the start of a “joint services operation” under military command.

Officials insist the reform will improve the efficiency and responsiveness of Ukraine’s forces, but critics say it gives Mr Poroshenko and his military chiefs sweeping powers a year before presidential and parliamentary elections.

Russia says Mr Poroshenko will now enjoy “near-dictatorial powers”, and it has called the changes “preparation for a new war”.