Kazakhstan president speaks out in defence of Ukraine territorial integrity 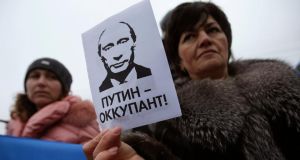 A woman holds a sign with a portrait of Russian president Vladimir Putin and the words “Putin – Occupant” during a pro-Ukrainian rally in Simferopol yesterday. Photograph: Reuters/David Mdzinarishvili


Ukraine’s Maidan revolution has dealt a blow to Vladimir Putin’s plan to create a Moscow-led Eurasian Union of former Soviet states that will restore what he sees as his country’s rightful place as a strong power at the crossroads of Europe and Asia.

Russia’s military intervention in Crimea has made matters worse, stoking concern in Kazakhstan and Belarus – the cornerstones of the planned Eurasian Union – about Kremlin aggression.

Most former Soviet states have remained silent as Russia tightens its grip on Crimea, wary of possible repercussions.

However, in an uncharacteristic move, Nursultan Nazarbayev, the authoritarian president of oil-rich Kazakhstan, has broken ranks and spoken out in defence of Ukraine’s territorial integrity.

In a telephone conversation with Barack Obama on Monday night, Nazarbayev joined the US president in calling for the “peaceful resolution of the crisis in Ukraine using diplomatic methods that would ensure the territorial integrity of the country”.

In a separate call with German Chancellor Angela Merkel, Nazarbayev endorsed the same message that, whatever the answer to the dispute, Ukraine’s international boundaries must be sacrosanct.


Snap summit
Putin summoned Nazarbayev and Alexander Lukashenko, the president of Belarus, to a snap summit last week in what appeared to be a propaganda move to flag support for regional integration even as Ukraine’s interim government consolidated ties with Europe.

Kazakhstan and Belarus joined Russia in a customs union in 2009, a trading bloc that aims to mimic the European Union. The next step for the troika is to sign a pact formally creating the Eurasian Union on May 1st. Armenia and Kyrgyzstan, two of the poorest countries in the former Soviet Union, have pledged to join in.

Critics of Putin see the Eurasian Union project as a reincarnation of the Soviet Union without communist ideology, reflecting the Russian president’s imperialistic ambitions.

Nazarbayev understands that Russia can be a useful counterbalance to China’s growing influence in central Asia and has been generally supportive of Putin’s integration efforts while insisting on political independence.


Oil resources
For his part, Putin is counting on Kazakhstan with its vast oil and resources and long border with Russia to stand by the Eurasian Union project.

Kazakhstan’s traditionally friendly relations with Russia could sour in the wake of the Ukrainian crisis, said Mr Malashenko. “Russia is unpredictable. Putin is unpredictable. How can you deal with a person who wants to take over your neighbours?”

Russia pledged to respect Kazakhstan’s territorial integrity in 1994 just as it did for Ukraine. Nazarbayev has reason to be concerned that after Crimea, Kazakhstan could be next in Russian sights.

Like Crimea, Kazakhstan has a large ethnic Russian population mainly dwelling in its northern regions. “Everyone in Kazakhstan now realizes that Russia is a threat,” said Serikzhan Mambetalin, a Kazakh opposition leader.