Belgian police kill two men who open fire on them during one of about a dozen raids against a group that was about to launch "terrorist attacks on a grand scale", a federal prosecutor says. Video: Frederic Hausman/Reuters 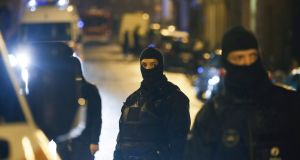 Rio police block the street of Colline in Vervier Eastern Belgium, 15 January 2014, after an anti terrorist operation in which two people died and one was injured. Photograph: EPA/Oliver Hoslet

Counter-terrorism operations were launched across Belgium on Thursday following the deaths of two suspected jihadists in an anti-terrorist raid in the east Belgian town of Verviers.

Two men were killed and a third was injured and arrested by counter-terrorist police. The three had returned from Syria last week and had been planning an imminent attack “on a grand scale” in Belgium, federal authorities said.

A second raid was launched at a house in Verviers close to the location of the first shoot-out on Thursday night while a number of counter-terrorist operations were under way in various areas of Brussels including Zaventem, near Brussels airport. In total 10 searches were under way at the domiciles of individuals recently returned from Syria, police said.

The dramatic events that unfolded just after 5.30pm local time saw police storm an apartment in the small French-speaking town near the German border after the suspects opened fire on police who had approached the apartment with a search warrant.

Officials said there was no known link between the events in Verviers and the attacks last week in Paris.

Earlier in the day prosecutors said they had detained a man who is suspected of supplying weaponry to Amedy Coulibaly, the French man who killed four people at a Paris Jewish grocery supermarket last week.

Belgium is believed to have one of the highest proportions of “foreign fighters” – Europeans who have travelled to Syria and Iraq to fight for jihadist groups – in the European Union. The country of 11 million people has long had a significant Muslim population, with 6 per cent estimated to be Muslim.

In October a high-profile case involving 46 members of the jihadist group Sharia4Belgium opened under tight security in Antwerp, a city with a vibrant Jewish community.

EU foreign ministers are scheduled to discuss how to tackle the growing threat of jihadist attacks at a meeting in Brussels on Monday, with discussion likely to focus on how to progress stalled EU legislation on pooling air passenger records. The European Parliament has been reluctant to back the plan over concerns about data privacy rights.

The colleagues of murdered cartoonist Berhard Verlac, known as Tignous, used felt pens to decorate his coffin with drawings and words of endearment at a memorial service in his home town of Montreuil.

Tignous’s widow, Chloe Verlac, thanked mourners assembled at the service “for continuing for us, for defending secularism.”

At Père Lachaise cemetery, Elsa Wolinski said the men who killed her father, Georges, also a cartoonist at Charlie Hebdo, “killed a man but not his ideas . . . We will continue to defend the principles of Charlie Hebdo.”

The massacre at Charlie Hebdo continued to prompt strong reaction around the world yesterday.