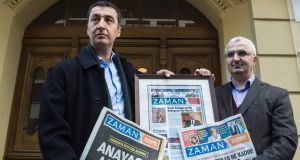 The timing of Monday’s EU-Turkey summit could not have been worse. Three days earlier Turkish police raided the offices of Zaman, the country’s best-selling newspaper, hours after it was put under state control.

While the editors managed to publish its Saturday edition as planned, the Sunday edition displayed a perceptible change in editorial control, as the paper omitted any mention of Friday’s events and carried positive articles relating to Turkish president Tayyip Erdogan.

The seizing of the newspaper by government authorities is precisely the kind of clampdown on media freedom that critics of Turkey have been warning about as the EU has swivelled towards Turkey in recent months.

The EU issued a feeble statement on Saturday in response to the Zaman closure, noting that Turkey, like all EU accession countries, “needs to respect and promote high democratic standards and practices, including freedom of the media”.

On Sunday, Guy Verhofstadt, head of the European Parliament’s Alde group and former prime minister of Belgium, accused Europe of “selling its soul” by signing up to a deal with Turkey.

The migrant crisis, which saw more than one million people flee to the European Union last year, has prompted a dramatic shift in direction in the EU’s policy towards its eastern neighbour.

Turkey’s dream of EU membership, which has been on the back-burner since the country became an EU candidate country in 2005, has now edged into the spotlight, as the EU offers Turkey the promise of accelerated talks on visa liberalisation if Turkey reduces the number of migrants leaving for Europe. A €3 billion investment plan and the opening of a number of chapters in the accession negotiations are the other main strands of the EU-Turkey deal agreed in November, which was up for discussion by EU leaders again in Brussels.

European Council president Donald Tusk’s round of diplomacy last week that brought him to countries along the western Balkans route before concluding in Turkey on Friday had gone well according to officials. Officials reported progress between the two sides, with Turkey privately pledging to take back non-Syrian migrants that have entered the EU from Turkey.

However, by lunchtime things had changed and Turkey was demanding more money than the €3 billion agreed in November and was requesting that a planned review of visa-free travel be moved forward even further from October to June.

The tabling of a new proposal by Turkey during a lunch for Davutoglu and the 28 leaders forced EU leaders to reconfigure the timing of the summit. Rather than focusing on the future of Schengen in their afternoon EU-only session, leaders agreed to meet the Turkish prime minister for dinner last night after reviewing the proposal.

While EU officials said that Turkey’s new demands were being met by equally tough demands from the EU in terms of reducing the number of refugees, the optics of Monday’s meeting were symbolic. The sense that Turkey, not the EU, is in the driving seat in terms of Turkey-EU relations has vindicated those who criticised the EU’s decision to court Turkey.

The broader premise of the EU-Turkey deal, in particular the demand that Turkey re-admits those migrants not eligible for asylum, has also been criticised by human rights groups.

Amnesty International said the idea that Turkey was a “safe country” to which migrants could be sent back was “absurd”, pointing out that some refugees in Turkey had been deported back to Syria, and some had even been shot at.

It is difficult to lecture a country that has already accepted 2.7 million refugees on standards while the EU continues to quarrel about the relocation of a few thousand refugees.

The expectation that the EU was poised to double the money on offer to Turkey last night and bring forward visa liberalisation plans will dismay many. But even if the deal does succeed in reducing the flow of migrants, it is only a quick-fix solution and raises the prospect of millions of refugees being stuck in an international no-man’s land in Turkey.

The primary cause of the refugee crisis – the five-year civil war in Syria – was barely mentioned on Monday in Brussels, despite the fact that resolving the Syrian conflict is essential to ensure that the current crisis does not become a permanent reality. That discussion, it seems, will be for another day.