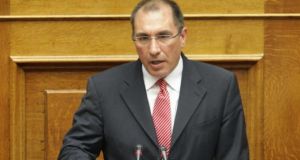 The naming of Dimitris Kammenos as a junior minister emerged as the most contentious appointment, given the content of many of his commentaries on social media in recent years.

The naming of ministers in Greece’s coalition government was marred by controversy on its first day in office following the decision of prime minister Alexis Tsipras to appoint an MP accused of holding anti-Semitic and homophobic views to a junior ministry.

Less than 12 hours after being sworn in, a deputy minister in Greece’s renewed leftwing-nationalist coalition was pushed into resigning after a series of anti-Semitic and homophobic tweets he posted in recent years made his position untenable.

In an otherwise predictable ministerial line-up that included the appointment of a retired army general as police minister, the naming of Dimitris Kammenos as deputy minister of infrastructure, transport and networks emerged as the most contentious given the content of much of his commentary on social media in recent years.

Mr Kammenos is an MP with the nationalist Independent Greeks party, which Alexis Tsipras again chose as his junior coalition partner after winning Sunday’s election.

When challenged by another twitter user about the claim, Mr Kammenos, no relation of Independent Greeks leader Panos Kammenos, replied: “F*** your Talmud.”

Late last night, the new deputy minister was asked to step down pending an investigation into whether the tweets were genuine. Appropriately, given the circumstances, his party leader called for his resignation in a tweet.

Shortly before he was asked to step down, Mr Kammenos had alleged that “most” of the controversial posts had been “manipulated by known forgers” for electoral purposes, adding that his social media accounts, which he said were controlled by “15 staff”, were often hacked. “I wish to state that I am totally opposed to certain posts which were seen or were offensive to certain groups of our fellow citizens.

“I personally apologise to those who have been annoyed by them and I explicitly condemn racism, anti-Semitism and homophobia,” he said.

As Mr Kammenos’s twitter timeline became the object of intense scrutiny after it was announced he was among the appointees, his account was deactivated some hours before he was formally sworn into office.

Mr Kammenos’s appointment baffled many observers as was known for his controversial tweets.

During the referendum campaign on the Greek bailout this summer, Mr Kammenos was criticised by Greece’s Jewish community for trivialising the Holocaust after he posted a doctored photograph that replaced the words “Arbeit macht frei” on the gates of Auschwitz with “We’re staying in Europe”, which was the slogan of the pro-euro camp during the campaign.

Mr Kammenos, who was among the founding members of the anti-austerity Independent Greeks in 2012, has also displayed a homophobic streak online.

In June 2014 he queried why Golden Dawn, a neo-Nazi party involved in violent attacks, had not taken “forceful action against the disgraceful gay parade” marking Athens Pride.

According to the semi-official ANA news agency, he will be replaced as deputy minister by a fellow Independent Greeks MP, Panagiotis Sgouridis, who was a Pasok MP for many years.