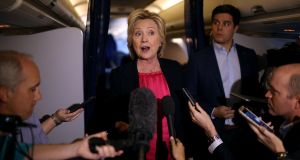 Hillary Clinton aboard her campaign plane yesterday. After polling strongly following the Democratic convention, the nominee is falling behind Donald Trump in some polls. Photograph: Justin Sullivan/Getty Images 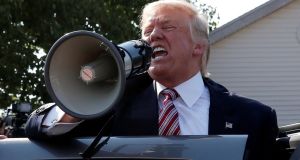 Donald Trump at a campaign stop in Ohio on Monday. His poll gains come after a month-long barrage of criticism about Hillary Clinton’s emails and ties to the Clinton Foundation. Photograph: Reuters/Mike Segar

Republican candidate Donald Trump has narrowed Hillary Clinton’s advantage in US presidential election polls and has retaken the lead over his Democratic opponent in one national poll.

The latest CNN/ORC national poll gives Mr Trump a 45 per cent to 43 per cent lead over Mrs Clinton among likely voters in the November 8th ballot. Libertarian candidate Gary Johnson is at 7 per cent and Green Party candidate Jill Stein is at 2 per cent.

Despite the Republican nominee’s lead in this latest poll, most voters (59 per cent) say that the former secretary of state will reach the required 270 electoral college votes to take the White House, compared with 34 per cent for Mr Trump.

Mr Trump’s gains in the polls come after a month-long barrage of criticism about Mrs Clinton’s emails and ties to the Clinton Foundation, her family’s charity, and despite the Republican nominee’s vacillations on immigration, another overhaul of his campaign management team, and high-profile Republican defections of support for Mrs Clinton.

A 50-state poll of more than 74,000 registered voters by the Washington Post and Survey Monkey shows Mrs Clinton with a strong lead in many battlegrounds. Some traditional Republican states give her a clear edge heading into the final 62 days of the campaign.

The Democratic nominee has a lead of four points or more in 20 states and the District of Columbia, giving her a total of 244 electoral college votes, just 26 short of the winning line.

The Republican nominee also leads by four points or more in 20 states, but these are less populated and yield just 126 electoral voters.

The candidates are running much closer – less than four points apart – in the remaining 10 states, with 168 electoral votes up for grabs.

Mrs Clinton leads in two other battleground states, Colorado and Florida, and is in a dead heat in North Carolina, a purple state that the last Republican nominee, Mitt Romney, won in 2012.

The most surprising result in the poll is Texas, a Republican stronghold where Mrs Clinton and Mr Trump are in a statistical tie. The Democrat is leading by 46 per cent to 45 per cent.

A Democrat has not won the Lone Star State since Jimmy Carter in 1976, though a rapidly growing Latino population is expected to bring the state into play in upcoming election cycles.