True face of Berlin begins to reveal itself 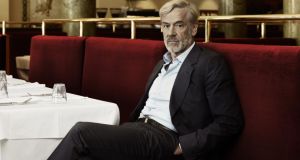 Roland Mary, proprietor of Berlin restaurant Borchardt: “I don’t have a missionary zeal to give the city back something it lost, but I see a market for this – otherwise it wouldn’t work.” Photograph: Derek Scally

I’m sitting in the Berlin restaurant Borchardt, marvelling at the deceptive perfection of it all.

The tablecloths are white and almost as crisp as the slabs of Wiener Schnitzels the waiters whisk from the kitchen to the courtyard.

There, bankers sit with politicians, C-list celebrities wait to be recognised and, at the far-flung tables, a few tourists are allowed look on.

The warm weather means the dining room is almost empty, all the better to study it in detail: the vaulted ceiling, Corinthian-style pillars, red banquettes and patterned floor tiles. A vaguely familiar song drifts as muzak through the air but I can’t recall its name.

Borchardt has been here since 1992 but works hard to look like it’s been here forever. Proprietor Roland Mary has written a book, Gefarhenzone, about his restaurant’s rise to become the place to see and be seen in the new Berlin.

“I like the classical things,” says Mr Mary as he sits down. Looking down at his white suit, he adds: “What I have on today is an exception, my wife thought white would work.”

Have lunch in Borchardt and dinner in Grosz and you will realise that, in today’s Berlin, nostalgia is finally what it used to be. The city famed for its edgy atmosphere and historical scars is now being retro-fitted with single-minded obsession. Mr Mary’s empire is the vanguard of this embrace of fauxthenticity.

For anyone who knows this gritty, survivor city, it seems like the most unlikely turn of events. Some 15 years after the German government returned, heralding the birth of a so-called “Berlin Republic”, is the city’s real face revealing itself?

The move from Bonn was criticised by those who favoured the Rhineland modesty and who feared a return would concentration forces in Berlin that had previously ended in disaster. Berlin Republicans dismissed such concerns, pointing out how postwar Germany’s federal system would keep the banks in Frankfurt, the media in Hamburg and Cologne, the money in Munich and the industry in the Ruhr and Stuttgart.

But slowly, Berlin’s centrifuge is beginning to exert its pull. Companies without big machines or factories to shift are relocating quietly to Berlin, saying they can’t find staff if they’re based anywhere else. Long-established locals complain that Berlin’s fauxthentic face is the result of new money from reactionary new arrivals. However, Berlin’s history suggests the city is merely reverting to opportunistic type.

After German unification in 1871, the new imperial capital’s rush to catch up with other big European cities prompted Walter Rathenau – the Berlin-born writer, industrialist and Weimar-era foreign minister – to describe his home town in 1899 as “Parvenopolis”.

Three decades later another Berliner, satirist Kurt Tucholsky, suggested the city “unites all the disadvantages of the American metropolis with those of a German provincial city”.

“They consider them successful imitations,” he noted, “but they are, in reality, failed originals.”

A century on, failed originals – both people and buildings – are once again filling up a city the Frankfurter Allgemeine daily has dubbed a “cynical bad bank, where everyone is waiting for the next bailout . . . so that everything can go on”.

A quarter century after the fall of the wall, the East Berlin regime collapsed but the West Berlin regime survives, along with a sense of entitlement cultivated by decades as a subsidy-financed walled-in city.

The city-state is a big spender but a pygmy earner. It claims to be a booming start-up hub, yet the list of successful startups is modest and the jobless rate remains almost twice the national average. Berlin earns just 53 per cent of its budget itself, with the rest coming from handouts. It spends one third of its total budget on welfare and debt interest payments. Under the 13-year stewardship of the mayor, Klaus Wowereit, the city he famously described as “poor but sexy” became considerably poorer thanks to a one third jump in its debt to €63.8 billion.

While the rest of eastern Germany works hard to create a new future for itself, Germany’s frustrating and compelling capital has a new determination that its future should look like its lost past.

Under the coved ceilings of Borchardt, Roland Mary believes his traditional-style establishments can, over time, establish their own tradition. “I don’t have a missionary zeal to give the city back something it lost, but I see a market for this – otherwise it wouldn’t work,” he says.

Making a slow exit from Borchardt, trying to separate authentic from fauxthentic, the name of the muzak melody in the air pops into my head: “Just like before, it’s yesterday once more.”