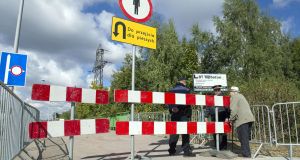 Policemen talk to a man at a road block between Walbrzych and Wroclaw, where a search for a rumoured second World War “gold train” is taking place. Photograph: Piotr Hawalej/AFP/Getty Images 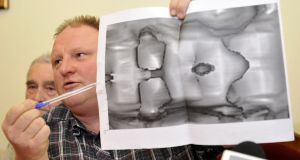 Explorer Piotr Koper points on a ground-penetrating radar image which represents, according to him, a second World War Nazi train during a press conference on September 18th near Walbrzych, Poland. Photograph: Piotr Hawalej/AFP/Getty Images

The gold diggers have arrived here in Lower Silesia. They have stormed the Ksiaz Castle. Upended earth and artefacts. Emptied store shelves of metal detectors. In normal times, this province in southwest Poland has an unassuming charm and struggles financially. But since two groups of explorers claimed to have discovered evidence related to a local legend – a Nazi train loaded with treasures, supposedly hidden here – nothing has been the same.

“The thaw for unearthing the secrets of our region has begun,” Krzysztof Kwiatkowski, governor of Walbrzych County, told reporters two weeks ago. The legend could be the basis for a movie: Hidden in the forested mountains near here is a secret underground city built on Hitler’s orders. As the Soviet army advanced in the closing days of the second World War, the Nazis fled, leaving behind a train loaded with gold, gems and armaments.

For more than 70 years, the legend endured, though many historians scoffed at it. But in late August, two explorers, Piotr Koper and Andreas Richter, claimed to have found what they believed to be the mysterious “gold train”. Then another local explorer, Krzysztof Szpakowski, declared that he, too, had made a discovery less than 24km from the train site – a multilevel complex of tunnels in the Owl Mountains that could be part of the biggest underground infrastructure built during the war on Hitler’s orders. The purpose of the project, known as Project Riese, German for “giant”, is shrouded in secrecy to this day.

Verification of both discoveries, according to the local authorities, is months away. The sites could be booby-trapped with mines. Explosives experts from the Polish army started examining the train site on Monday and will not finish before the end of the week.

Bartosz Rdultowski, an author of books on the mysteries of Lower Silesia, said he, like many historians, was sceptical about the reports. “How many times we’ve heard it?” he said. “In the late ’90s, the government issued an order to blow up half a mountain near Piechowice in Lower Silesia because one guy said that the train was there. Well, it wasn’t.”

Numerous archaeological sites, including old cemeteries and the site of a Napoleonic battle in 1807 in the nearby city of Struga, have been dug up and vandalised, said Barbara Nowak-Obelinda, the conservator of monuments in Lower Silesia. More than 120 media organisations from around the world have besieged the picturesque Ksiaz Castle, 6.4km from the site where the train was said to have been detected, said Andrzej Gaik, a castle guide.

The treasure hunt has worried local officials and has already claimed a victim: a 35-year-old man who the authorities said died when he fell while trying to break into a tomb near the city of Walbrzych three weeks ago. The tomb belonged to the von Kramst family, German owners of a Silesian textile empire, and was rumoured to be full of treasure.

“This gold rush madness got to a point where we had to do something to scare off other amateur treasure seekers,” said Nowak-Obelinda, who filed a complaint with the prosecutor’s office against two groups of explorers who had not obtained permits to use ground-penetrating radar in their searches. “Every morning I have new complaints from our archaeologists that more sites were vandalised during the night.”

Elzbieta Mirkowska (74) lives just over a mile from the site where the train is said to be. “I’ve been hearing about this train for at least half a century,” Mirkowska said. “After all this time, it would be lovely to finally dig this thing out.” “But these fortune seekers are a bit much,” she said. “They used to be everywhere, walking with little metal detectors. Fortunately, now they are more scared and do it mostly at night.”

Historians say the Third Reich used the castles and mansions here as a treasure chest for the artworks, jewels and gold plundered in this part of Europe. Some researchers even believe that Nazis may have hidden in the area the Amber Room looted from St Petersburg, Russia, or Portrait of a Young Man by Raphael.

After decades of largely fruitless searches by the Polish authorities and amateur explorers, some local officials are optimistic that the region could be on the verge of unlocking some of its mysteries.

“If the city wanted to pay for this kind of prime-time advertising, we estimate that we would have to spend 100 million zloty” (€23.5 million), said Anna Zabska, director of the Old Mine Science and Art Museum, which started producing T-shirts, mugs and flashlights with the image of the legendary train.

For weeks, herds of curious onlookers have been lingering by the green viaduct near the site where the train is reported to be, even though it is heavily guarded by railroad security guards and police officers day and night.

Maciej Nowak and Jaroslaw Piwowarczyk, history enthusiasts from Krakow, made a quick stop here to see the site. “I’m a sceptic,” Nowak said as he looked toward the railway security guards. “But just how great would it be to again live in a world where legends come back to life?”