5,000 employees who work in the tower at risk 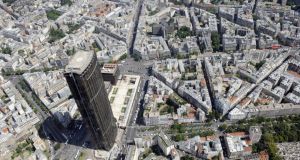 Asbestos released in the course of seven years of decontamination has lodged in the Tour Montparnasse’s ventilation system. Photograph: Boris Horvat/AFP/Getty Images

A preliminary report drawn up at the request of the Paris prefect has confirmed that cable ducts in the Tour Montparnasse, a landmark building completed in 1973, are lined with carcinogenic asbestos. More dangerous still, asbestos released in the course of seven years of decontamination has lodged in the tower’s ventilation system, which carries it to areas that were believed asbestos-free.

The report, a final version of which will be published next month, was obtained last week by Le Monde and the Agence France Presse. Its findings led French authorities to suspend decontamination work until further notice. The process has already cost the tower’s owners €250 million. The completion date, initially 2009, has been postponed three times, now until 2017.

Some 5,000 people work in the 207m tower. Two companies have evacuated their offices. Other employers must decide whether to follow. Magistrates who specialise in medical issues have been assigned to investigate asbestos contamination in the tower, with a mandate to determine who is responsible for endangering the lives of employees.

Asbestos levels
Since officials began monitoring asbestos levels in the tower four years ago, tests have shown levels surpassing the legal limit of five fibres per litre of air on 72 occasions.

The highest level of asbestos, 98.8 fibres per litre – nearly 20 times the legal limit – was recorded in late 2012 in the 48th-floor offices of the national council of the order of architects. The council’s presence had been seen as a triumph for the building’s owners, because architects so often expressed outrage at the tower’s design.

The asbestos problem plagued celebrations earlier this year of the 40th anniversary of the opening of the tower. The building was the brainchild of Wylie Tuttle, a New York property developer who organised a syndicate of 24 insurance companies and banks to build the $140 million complex. Wily Wylie, who died in 2002, sold the office space and extricated himself from the project.

As recounted in La Tour Montparnasse 1973-2013 by Sylvie Andreu and Michèle Leloup – subtitled Je t’aime . . . moi non plus – 70 artists’ ateliers were razed to make way for the tower, destroying the artistic, bohemian character of Montparnasse.

Parisians often joke that the tower is the finest location in the city, because it’s the only place from which one does not see the Tour Montparnasse. Resembling the black monolith in Stanley Kubrick’s 2001: a Space Odyssey, it is considered by many to be a 120,000-tonne crime committed in the name of modernity, on the pretext that Paris was falling behind other European capitals.

Jean-Marie Pierrel, president of the tower’s management company, minimised the report’s findings. “There is no generalised, permanent exposure [to asbestos],” he was quoted as saying in an interview with Le Parisien. The building’s owners are the victims of their overzealous enforcement of rules regarding monitoring and decontamination, he said.

Decontamination
Michel Parigot, of the asbestos victims’ association Andeva, asked: “Is it reasonable to decontaminate a tower this size bit by bit? The answer is no.” Parigot accused the owners of doing “a makeshift job to save money” and to avoid displacing tenants. Andeva wants the tower to be evacuated and decontaminated in its entirety.

Asbestos has been known since the 1950s to cause cancer but it was such efficient fireproof insulation that its use was not banned in France until 1997. A 2005 report by the French senate said at least 35,000 people had died from asbestos-related illnesses between 1965 and 1995. The fibres lodge in the honeycomb-like structure of the lungs, and take decades to kill. Up to 100,000 French people are expected to die from asbestos poisoning by 2025.