Death from lack of oxygen most likely ‘caused by the police’, says prosecutor 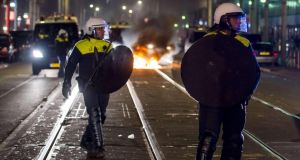 Riot police patrol in the Schilderswijk district of The Hague during the third night of riots following the death of a tourist in police custody. Photograph: Marco de Swart/AFP/Getty Images

Dutch police used water cannon and horses to break up a third night of riots in The Hague, fighting street battles into the early hours of this morning with up to 300 rioters – angry at the death of a 42-year-old man arrested as he left an outdoor concert on Sunday night.

The death has become a huge embarrassment for the police, who first said the man had become ill when he was put in the back of a police car, only to see a flood of evidence online showing him being dragged along by officers, possibly unconscious, before being tossed into the back of a paddy wagon.

The incident did nothing to help the police gain public support for plans to block the Tour de France in Rotterdam next Sunday in support of a pay claim – and so it came as little surprise when the high-profile protest action was called off quietly after a brief union meeting this afternoon.

The public prosecutor in The Hague, Kitty Nooy, did little to hide her frustration at the contradictory stories that emerged in the first 24 hours – saying she now believed the man had died of lack of oxygen and that this had most likely been “caused by the police”.

In an unusually detailed presentation, she said tests had shown that the man – a tourist from the Dutch Caribbean island of Aruba, named Mitch Henriquez, who was visiting family – had not been drunk, had had no drugs in his system and had shown no signs of having died of natural causes.

She said Henriquez had allegedly been shouting that he had a gun, although several of his friends said he had simply been “play-acting” after a concert by UB40, when he was given a warning by police, before being grabbed by a number of officers, handcuffed and dragged away.

The Hague’s police chief, Paul van Musscher, later announced that five officers had been suspended and were being treated as “official suspects” in the investigation into Henriquez’s death.

“I can only assume that the police intervention was made with the best of intentions, but there is no doubt that something went very, very wrong”, he said. “I intend to find out what that was.”

Appealing for calm, justice minister Ard van der Steur promised an independent investigation, after which, he said, there would be a transparent decision on “what should be done with the police officers involved”.

Most of the rioting has been in the city-centre suburb of Schilderswijk, one of the poorest neighbourhoods in the Netherlands, where more than 90 per cent of the residents are of Turkish, Moroccan, or Surinamese origin, and unemployment is high.

It is understood at least 68 people have been arrested, most of them minors, and the street leading to the local police station had to be sealed off at the height of the disturbances.