The Russian perspective: why Putin argues the US and EU are real aggressors 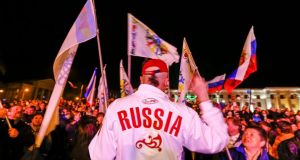 Even if he was not just about to sign a treaty that defied international law to expand Russia’s borders, Russian president Vladimir Putin would have felt powerful as he entered the gilded St George Hall in the Kremlin palace on Monday to the sound of rapturous applause.

Russia’s elite, from parliamentarians to government officials and religious and cultural leaders, were all rejoicing that their president was bringing Crimea home.

In a fiercely patriotic speech, Putin invoked history to justify Russia’s claim to Crimea and exposed wrongheaded Soviet policies that had allowed the strategic Black Sea peninsular to slip into Ukraine’s hands.


Tables turned
Facing condemnation from both sides of the Atlantic for Russian action in Crimea, he turned the tables on the West, saying it was responsible not only for the chaos in Ukraine but for deteriorating stability across the globe.

Russia was resurgent and determined to assert not only its national interests but its rightful place in the globe.

In his opening remarks, Putin quashed western accusations that Russia’s move to annex Crimea was an unprincipled land-grab. Crimea had exercised its right to self-determination and voted overwhelmingly in favour of secession at a referendum on March 16th.

Russia was correcting an historic injustice in welcoming Crimea into its fold. Conquered by Russian imperial forces in the late 18th century, Crimea would have remained part of Russia if it had not been for a legal blunder by Nikita Khrushchev, the Soviet leader, who gifted the Black Sea peninsular to Ukraine shortly after Stalin’s death in 1954.

Khrushchev may have been trying to gain the support of the Ukrainian elite or atone for the repressions of the 1930s that condemned Ukraine to an appalling famine. But he acted in violation of “constitutional norms” at the time.

Back then, no one imagined that the Soviet Union might one day fragment and Ukraine and Russia become separate states. Ukraine’s declaration of independence in 1991 had “robbed” Russia of Crimea.

Although wanting friendly relations with Ukraine, Russia refused to accept the new authorities in Kiev who, with the help of radical ultranationalists, had seized power in an unconstitutional coup. Russia, Putin suggested, had a humanitarian responsibility to go to the rescue of Crimea’s large ethnic Russian population, who were in danger of attack from marauding “neo-Nazis, anti-Semites and Russo- phobes”.

Although Putin won permission from Russian lawmakers to deploy troops in Ukraine in the wake of the revolution, he had not yet exercised that right. Russia had deployed extra troops to protect military installations in Crimea but, contrary to western allegations, there had been no invasion of the peninsular.

Putin said the chaos in Ukraine reflected a broader breakdown in global security since the collapse of the Soviet Union, which made way for a unipolar world.


‘Rule of the gun’
Western powers, led by the US, had abused power, ignoring international law in favour of the “rule of the gun”.

As examples, Putin listed the US bombing of Yugoslavia in 1999, the invasion of Iraq in 2003 and the bombing of Libya by US and European forces in 2011 even in the UN-prescribed no-fly zone, all of which Russia had opposed.

More relevant to the Crimea case was the broad acceptance by the West of Kosovo’s controversial decision to secede from Russia’s ally Serbia in 2009 and become an independent state. If a special case had been made for Kosovo, it was two-faced to protest that Crimea’s secession from Ukraine was illegal.

Putin implied that the US and the EU had, not for the first time, fanned the flames of revolution in Ukraine. Sponsorship of regime change in Ukraine was part of a concerted campaign by the West against Russia and against the Kremlin’s plans for Eurasian integration. “With Ukraine, our western partners have crossed the line, playing the bear and acting irresponsibly and unprofessionally,” he said.

If Russia’s national interests were at stake in Ukraine, so too was its position as a resurgent power determined to be involved in shaping the world order.


Constantly sidelined
Putin complained that the West had constantly sidelined Russia in global decision-making since the fall of the Soviet Union. Promises had been broken and deceitful steps taken behind Russia’s back.

A particular grudge was Nato’s failure to honour a pledge made to Mikhail Gorbachev in 1989 not to expand beyond Germany. Russia’s western borders were now flanked by members of the US-backed military alliance from the Baltics to Poland, Hungary and Bulgaria.

The prospect of Nato troops settling down in Crimea, the home of Russia’s Black Sea fleet, was unimaginable, Putin said. “Let them come and visit us there instead,” he said.