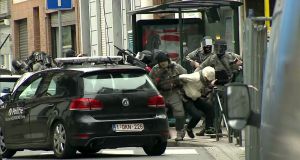 Belgian-born Salah Abdeslam, one of the main suspects from November’s Paris attacks, was arrested after a shootout with police in Brussels on Friday. Photograph: Reuters

Terror suspect Salah Abdeslam has told Belgian investigators he was planning to “restart something” from Brussels.

Belgian foreign minister Didier Reynders said that Abdeslam told police “he was ready to restart something from Brussels, and it’s maybe the reality”.

Mr Reynders said authorities are taking the claim seriously because “we found a lot of weapons, heavy weapons in the first investigations, and we have seen a new network of people around him in Brussels”.

Abdeslam, captured on Friday in a police raid in Brussels, was charged on Saturday with “terrorist murder” by Belgian authorities. He is a top suspect in the November 13 attacks in Paris that left 130 people dead.

After the Paris attacks, security forces searched far and wide for Abdeslam, who vanished after returning to Brussels, believing Islamic State could have spirited him away to Turkey, Syria or Morocco.

It appears Europe‘s most wanted man never left the Belgian capital. And it was family, friends and petty criminals who helped him evade a manhunt for four months before he was arrested on Friday in the neighbourhood he grew up in, not far from his parents‘ home.

As security services seek to understand how Islamic State operates in Europe to prevent more attacks, Abdeslam‘s case highlights the difficulty of tracking suspects who can rely on the protection of community networks, many of which do not involve religious radicals and are not on the police radar.

“Abdeslam relied on a large network of friends and relatives that already existed for drug dealing and petty crime to keep him in hiding,” Belgium’s federal prosecutor Frederic Van Leeuw said of the only surviving suspect of the November attacks that killed 130 people in Paris.

“This was about the solidarity of neighbours, families,” Mr Van Leeuw told public broadcaster RTBF, speaking about Abdeslam’s ability to hide for so long despite 24,000 calls from the public to a Belgian police hotline seeking information about the suspected attackers.

Abdeslam may have been hidden in the basement of an apartment of the mother of a friend with no links to militants, Belgian newspaper La Libre Belgique reported on Sunday.

Such friendships, not Islamic State operatives, proved crucial from the start for Abdeslam, who ran a bar in Molenbeek with his brother, which was a nexus of social life for young Arab men with little interest in the mosque but was shut down shortly before the attacks for being a hub for drug dealing.

Abdeslam relied on two friends to drive him back to Brussels after his brother Brahim blew himself up at a Paris cafe. Others drove him around Molenbeek and its environs between safe houses.

Police, who were eventually able to move in to seize him at a house in the rundown North African neighbourhood of Molenbeek, have charged a man and a women whom they suspect of being part of a family who harboured the fugitive.

While Abdeslam’s networks were not infallible - his call to an acquaintance for help looking for a new hiding place let police finally locate him - they were formidable.

Few residents would talk to Reuters about Abdeslam, a 26-year-old French citizen raised by Moroccan-born parents in Molenbeek, on the poorer side of the city’s industrial-era canal.

Most of those that did said he was a likeable guy who was known in the area.

Dominique, who ran a newsagents close to where Abdeslam was arrested, described him as “a very nice boy” who showed no signs of becoming a radical. Abdeslam did not fight in Syria.

“I won‘t say he was normal because everyone always say that, but he had a nice manner, he wasn‘t aggressive,” said Molenbeek resident Pierre, in his 50s.

But another Molenbeek resident, Henri, meanwhile warned that Abdeslam was not the only one attracted by radicalism in the area. “It‘s not over,” he said. “There are a lot of them.”

Western fighters in Syria and Iraq have found some of their most willing recruits in Belgium, partly because of the frustration many jobless young men feel in the marginalised quarters of Brussels - just a few kilometres from the wealth and power of the headquarters of Nato and the European Union, but effectively a world away.

Belgium has supplied the highest per capita number of fighters to Syria of any European nation. More than 300 Belgians have gone to take up arms in Syria and Iraq, according to an estimate from the Brussels-based Egmont think-tank.

Radicals such as another Molenbeek man Abdelhamid Abaaoud, the suspected planner of the Paris attacks who was killed by French police late last year, posted internet videos of his exploits as a foreign fighter in Syria.

But while three of the Paris attacks suspects grew up in Brussels, not all radicalised Belgian militants head for Syria.

They are part of “networks and accomplices“ who have not attracted police attention, according to the Belgian foreign minister and who has promised to extend surveillance.

Some sell drugs and weapons in an area where locals have a reputation for not co-operating with police, doing only part-time work for Islamic State such as recruiting fighters to go to Syria and helping to plan attacks, Belgian prosecutors said.

That would suggest police work cannot be focused simply on city mosques or monitoring social media and intercepting intelligence from militants in Syria and Iraq.

“I don‘t think Daesh is giving orders 24 hours a day. That would make it too easy for us,” said prosecutor Van Leeuw, referring to the militant group by its Arabic acronym. “People work freelance.”

Such complexity has prompted European police chiefs to urge governments to focus on the links between political militants and organised crime - noting, for example, that financing for militant groups has often come from drug dealing and racketeering while established crime gangs probably supplied the Kalashnikovs favoured in recent IS attacks.

Counter-terrorism expert Rik Coolsaet said that spotting Islamic State recruits in Europe was also becoming more difficult because, unlike in the past, youngsters were less likely to be pious conservatives but rather secular rebels who feel they have no part in society and are disillusioned by a perceived lack of opportunity.

Following the worst financial crisis in a generation and with few of the lower-skilled jobs their parents‘ generation enjoyed in Belgian car factories and coal mines remaining, there is a “no-future atmosphere” said Coolsaet, from the Egmont think-tank.

“Joining Islamic State opens a thrilling, bigger-than-life dimension to their way of life. For most of them it is akin to street gangs, drug trafficking, juvenile delinquency,“ he said.

“A journey to Utopia.”