Ten arrested over murder of investigative journalist in Malta 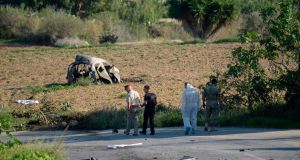 Police and forensic experts inspect the wreckage of a car bomb that killed journalist and blogger Daphne Caruana Galizia close to her home in Bidnija, Malta, on October 16, 2017. Photograph: AFP 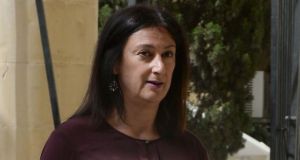 Maltese police have arrested 10 suspects for the murder of anti-corruption blogger Daphne Caruana Galizia, the country’s prime minister said on Monday, almost two months after she was killed when her car was blown up.

All of the suspects are Maltese nationals and most have a criminal record, Prime minister Joseph Muscat said, without providing any further details. The police have 48 hours to question the suspects, arraign them or release them.

Mr Muscat initially announced eight arrests at a press conference, then later said on Twitter that two more had been apprehended.

“Authorities have all areas of interest under control since early this morning and searches are underway,” he said.

A section of Lighters Wharf in Marsa was sealed off early on Monday as helicopters circled above. Military and police used sniffer dogs to search.

Caruana Galizia (53) was murdered on October 16th as she was driving away from her house in northern Malta.

She wrote a popular blog in which she relentlessly highlighted cases of alleged graft targeting politicians from across party lines.

Galizia was following leads from the Panama Papers, which were leaked in 2015 and show how the world’s rich use offshore firms to hide their wealth. She had also accused senior figures in the government and opposition of corruption and money laundering.

All have denied the accusations and Galizia was hit with 36 libel suits in the nine months preceding her death.

Her murder shocked Malta and raised concern within the European Union about the rule of law on the Mediterranean island. Concluding a fact-finding mission on Friday, a group of European Parliament members said there was a “perception of impunity” in Malta . – Reuters

1 Tyrone midwife on the cover of Vogue magazine
2 Donald Trump is in trouble, and that could spell very bad news
3 ‘White Irish people have never had to think about this’
4 Pubs reopening will not mean ‘fellas having a few pints and peanuts’, Holohan warns
5 Trump’s claim it was a ‘great day’ for George Floyd is criticised
Real news has value SUBSCRIBE