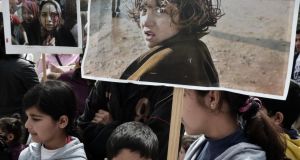 Children hold placards depicting young victims of the Syrian conflict, as they take part in a demonstration in front of the parliament in Athens on April 6th, 2013 in solidarity to Syrian refugees who fled the conflict in the country. Photograph: Louisa Gouliamaki/AFP/Getty Images

Fadi can count himself lucky, many times over. A young Syrian who fled his native country after deserting the Syrian army, he has had more than his share of escapes but is only too aware that he still has many more hurdles to jump before he reaches his goal: a secure and safe country, far from the war that has torn his country apart.

For Fadi, that place is Germany, where he has relatives, but the problem is that he is now in limbo in Greece, where he is permitted to stay on a six-month humanitarian visa that expires in March.

The 24-year-old Kurd from the northeastern corner of the war-torn country is just one of the 7,500 or so Syrians arrested for illegal entry or stay in Greece last year, in what has been described as the EU’s “soft underbelly”. In 2011, it accounted for about 90 per cent of apprehensions of undocumented migrants in the bloc.

Greece’s Syrian refugees are a small part of a much larger exodus from Syria. The UN’s refugee agency, UNHCR, has registered more than 2.1 million Syrian refugees – half of them children – in camps in Iraq, Jordan, Turkey and Lebanon. Inside Syria, an estimated 6.5 million people are internally displaced.

The EU has taken in about 65,000 Syrians, with most going to Germany and Sweden, a response that one leading human rights group says has “miserably failed” the refugees. “Across the board, European leaders should hang their heads in shame,” Salil Shetty, the head of Amnesty International, said last month.

As Angeliki Dimitriadi, a migrant expert with Athens think tank Eliamep, the Greek government’s dual policy of boosting its border controls and increasing its return programmes has made it increasingly difficult for Syrians to enter the country and apply for asylum, which pushes refugees like Fadi to take increasingly dangerous risks to get into the EU.

Night-time crossing
Along with a cousin, Ibrahim, and 41 other migrants, most of them compatriots, Fadi was fished out of the short stretch of sea between the Greek Aegean island of Lesvos and the Turkish coast last August. Like thousands of others who make the same journey, they paid a trafficker the going rate of €1,500 to make the night-time sea crossing, which at its shortest distance is 10km. But as they were on the boat for more than two hours, the point of departure was most likely from further south, closer to the Turkish city of Izmir, through which they had been taken, crowded into a minibus, on a 12-hour non-stop journey from Istanbul.

“We started our trip at about 2am, on an eight metre inflatable nylon boat. Apart from some boys who could swim, Ibrahim and I had no lifejackets, which the other passengers had bought from the trafficker. We couldn’t afford them,” he recalls, chain smoking, as he surveys the Athens skyline from a hill next to the Acropolis.

“All the children – many of them infants – and women sat in the middle, for their own safety, while all the men and boys sat around them. It was pitch dark so we couldn’t even see each other. We were terrified. The women and children were crying. I swear they were the worst few hours of my life. It was like a nightmare, a death trip,” he recounts.

But the worst was yet to come. As the lights of Lesvos came into view, Fadi remembers hearing a loud bang before landing in the water. Someone at the back had deliberately burst the craft. He says he and his cousin managed to stay afloat after grabbing an inflated car tyre that was on board.

Sabotaging vessels
While he insists he wasn’t expecting it, the sabotaging of vessels in this manner – usually by someone known to the trafficker – is common once they enter Greek territorial waters, because it ensures that the human cargo will be picked up by the Greek coast guard and taken to safety.

But as a disaster that unfolded earlier this week demonstrates, trafficking trips can have deadly results. On Sunday night, 12 migrants, most of them reported to be children, drowned off an uninhabited Greek island when the stranded fishing boat they were on capsized as it was being pulled by a Greek coast guard vessel. Aboard were 25 Afghans and three Syrians. Interviewed by the UNHCR, some of the survivors alleged that the boat keeled over as it was being towed at high speed towards the Turkish coast, a claim denied by the coast guard.

The UNHCR has called for an inquiry into the tragedy, as has the Council of Europe’s human rights commissioner Nils Muiznieks, who said he was “shocked and distressed” at “what appears to be a case of a failed collective expulsion”.

He was referring to so-called push- backs, which human rights groups have accused Greece of carrying out on its sea border. Late year, Amnesty and Pro-Asyl published separate reports alleging that refugees and migrants attempting to enter the EU through the Aegean were being systematically, illegally and, in some cases, brutally pushed back by the Greek authorities, in contravention of international law and with the complicity of the European authorities, whose Frontex border agency assists in patrolling Greece’s border.

These are controversies that the Greek government, which has just assumed the rotating six-month EU presidency, is keen to avoid. It has stated that it will use its time at the helm of the union to promote existing EU plans aimed at “preventing and combating illegal migration and eradicating trafficking in human beings” on the one hand, and “promoting international protection and enhancing the external dimension of asylum” on the other.

But how the aim of guaranteeing asylum obligations can be balanced with tackling economic migration is the “the million-dollar question everyone is asking”, according to Dimitriadi, a migration expert.

“This is the inherent contradiction in the entire common European asylum system. We have somehow managed at a European level to link asylum seekers with irregular migrants; in no small part they use the same routes to enter the EU. Up to the border, you’re seen as one and the same, as an illegal,” she says, underlining that the drive to prevent and deter economic migrants also cuts off access to refugees.

Tough criteria
And securing an entry visa abroad that would legally allow Syrians enter Greece is practically impossible, as the UNHCR in Athens points out. “Theoretically, they can enter Greece legally if they get a visa from the Greek consulate in Beirut, Ankara or anywhere else. The consulate in Damascus is not operational. In practice, the criteria for getting such a visa are too tight to meet,” says Ketty Kehayioylou of the agency.

But Greece has made improvements to its once notorious asylum application system. A new civilian-managed service began processing applications last June, replacing the chaotic police-run authority that had the lowest protection rate in the EU, recognising only 0.9 per cent of applications – a mere 95 cases – in 2012 on the first instance. (Ireland had a 10.2 per cent recognition rate, also approving 95 cases, ranking it fourth from the bottom.)

Substantial improvement
Already, there has been a substantial improvement in positive decisions. In its first half-year of operations, the service accepted 15 per cent of the 5,000 applications received, although this is still only half of the EU average of 28.2 per cent. But figures show Syrians are now more likely to be granted refugee status than other nationalities, with the service approving a quarter of the 256 Syrian applications on the first attempt.

But it is clear that the response to the Syrian refugee crisis is not being equally shouldered by member states. “Burden-sharing doesn’t exist in reality,” says Dimitriadi. It is a view supported when one looks at the figures for Ireland, for example, which in the first half of 2013 had 26 asylum applications from Syrians. In addition, as part of an UNHCR programme, it has also agreed to resettle 90 particularly vulnerable Syrian refugees out of an EU total of 12,340. Greece made no commitment.

While an EU regulation, called Dublin II, states that refugees must apply for asylum in the EU country they first set foot in, Fadi – and most of his compatriots – doesn’t consider Greece an option.

Better package
Dimitriadi offers an explanation: “Recognition in Greece will offer them protection from the police and deportations. But that’s it. You will not get any assistance from the state, such as help in getting a job, learning the language or integrating. So for Syrian refugees in Greece, who seem to be mostly middle class and educated, coming into a system like the Greek one, especially at a time of economic crisis, is not very appealing. Countries like Germany and Sweden offer a better package, to put it bluntly.”

As for Fadi, he’s waiting for two uncles in Germany to come up with the €5,000 fee that the traffickers are asking to get him to Germany. Some people he knows have already completed the final leg of their journey, flying out from regional Greek airports on fake EU passports. He’s counting the days and on his lucky run continuing.