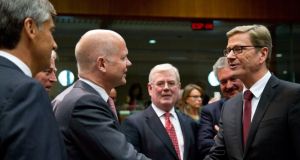 There was a time when August was a quiet month in Brussels, a period when European decision-makers returned to their respective member states and major policy decisions were put on hold.

That was before the euro-zone crisis erupted, demanding quick decisions and fast policy responses from European leaders. This year, foreign affairs rather than economic woes have drawn EU figures back to Brussels earlier than planned.

Last week an emergency meeting of foreign ministers was convened following the attack on supporters of ousted Egyptian president Mohamed Morsi in Cairo. Within a few days the two-year conflict in Syria exploded on to the international scene following reports of a chemical attack in Damascus.

The events have pushed any talk of the euro-zone problems, including rumblings of a third Greek bailout, off the front page, and firmly on to the political agenda in Brussels.

The rapidly evolving events in Syria have also put the question of the EU’s foreign affairs strategy into the spotlight.

As the European Union evolved and expanded eastwards, and the international landscape changed dramatically with the end of the Cold War, various moves to revive some form of collective foreign policy surfaced, including the European Political Co-operation system in the 1970s, and, later, the EU’s Common Foreign and Security Policy .

The perceived failure of Europe to act decisively during the Yugoslav wars of the 1990s prompted a push for a more cohesive foreign policy, with the EU setting up its own foreign affairs wing – the European External Action Services – under the Lisbon Treaty.

In recent years Europe has been involved in various peacekeeping and training missions abroad – the EU “battlegroups” initiative, which in theory allows 1,500 soldiers to be dispatched to conflict regions on demand, has never been deployed.

Differing views on militarism and intervention among member states has been the obvious barrier to the consolidation of a strong common defence position within the EU.

Like many problems facing the EU, the issue of foreign policy encapsulates the constant tension between individualism and collectivism that characterises the European project. As Ireland knows, the issue of militarism can be hugely divisive, lying at the fault-line between national sovereignty and collective defence.

The absence of a cohesive foreign policy strategy has given rise to various alliances within the Union – for example France and Germany’s opposition to the Iraq war led by the US and Britain in the wake of the 9/11 attacks.

For historic reasons, Germany has shied away from military intervention as a member of the EU. It opposed the 2011 action in Libya, abstaining from a UN Security Council vote on the issue, and was reticent about French attempts at intervention abroad, for example in Mali earlier this year.

As discussion on Syria has unfolded at the regular meetings of EU foreign affairs ministers in Brussels, Germany has been a strong force behind the EU’s insistence on finding a “diplomatic” solution to the crisis, in contrast to the interventionist stance of France and the UK.

Attention is now turning to the role of Nato. The north Atlantic alliance, established in 1949 at the outset of the Cold War, is responsible for the security of Europe and the north Atlantic region. Most, though not all EU countries, are members (of course Ireland is not) and the 28-member alliance also includes many former Eastern bloc countries. Given Nato’s mandate to defend Europe, some question whether the EU as a bloc needs to have a strong military strategy .

Tensions
Tensions have nevertheless surfaced between the US and Europe in recent years about Europe’s role in Nato, with former US defence secretary Robert Gates using his valedictory speech in 2011 to denounce European countries’ paltry spending on defence while at the same time they share the benefits of Nato membership.

As the international community, including the EU, weighs up its options on Syria in the next few days, expect the real decisions to be taken not in the European Quarter in Brussels but in Washington DC, London and Paris.