Switzerland needs to get act together on foreigner quotas 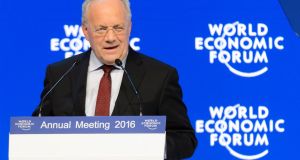 This week senior figures from the fields of business, politics and social justice descend on the Swiss resort of Davos for the World Economic Forum.

The annual event began as a small gathering of intellectuals in 1971 before growing to become one of the world’s biggest networking events. It provides a welcome boost to the local economy, adding about €70 million to the Swiss economy each year.

Switzerland is a country of contradictions. Often held up by academic theorists as an example of a cohesive nation state that manages to encompass four national languages, it has thrived as a wealthy enclave nestled in the heart of Europe without ever joining the European Union.

But this year the country faces a difficult challenge in its relations with its European neighbours. Almost two years ago, Swiss voters voted to introduce immigration quotas in a referendum proposed by the Swiss People’s Party.

The instant reaction from Brussels to the February 2014 referendum was cool and unequivocal: Switzerland’s move to curb immigration was not acceptable and could jeopardise a web of bilateral agreements that govern EU-Swiss relations.

Swiss students’ eligibility for the Erasmus student-exchange programme could also be in jeopardy, EU officials warned, as well as important air transport and agricultural agreements.

Swiss officials have scrambled to find some form of compromise. It’s a delicate balance. The vote in favour of curbing immigration reflects a deep-seated popular fear about immigration, one being echoed in many European countries.

About a quarter of the population of Switzerland are foreigners. Some 1.3 million EU citizens live there and another 300,000 or so cross their borders to work in Switzerland each day. Many benefit from higher wages than those available in neighbouring countries, though a recent deal with Italy on a double-taxation agreement could change the way tax is calculated for commuters.

It is precisely this rich homogeneity that many in the business community believe is a core reason for Switzerland’s economic success.

Just this week a survey by Adecco named Switzerland as the top country in the world for attracting skilled foreign workers, leaving it ahead of investment rivals such as Singapore, Luxembourg, Britain and the US.

Undoubtedly, the Swiss government finds itself in a serious predicament, conscious of the need to adhere to the will of the people as it seeks to transpose the referendum result into domestic law within the obligatory three- year time frame. However, a recent government-commissioned report warned that exiting key bilateral agreements could reduce Swiss GDP by 7 per cent by 2035.

It is hardly surprising, then, that a quest for a compromise is under way, with discussions intensifying in recent weeks.

The main focus of the discussions has been on Article 14.2 of the free movement agreement between the EU and Switzerland. This allows Switzerland to take appropriate measures in the event of “serious economic or social difficulties”.

Essentially, Switzerland is looking for a safeguard clause that would respect both the Swiss constitution and the Swiss-EU Agreement on the Free Movement of Persons. Unsurprisingly the question of what could constitute economic or social difficulty is a point of contention from the EU side.

But the matter is about much more than technical points of EU law. The forthcoming referendum on British membership of the EU is causing headaches for Swiss negotiators. EU officials have told the Swiss government that no agreement can be signed before the British referendum. They fear that granting Switzerland any compromise on immigration could send the wrong signal ahead of a referendum that will be heavily dominated by the migration issue.

Still, it appears that Brussels holds the upper hand in these negotiations. While Switzerland is an important trading partner for the EU, accounting for just under 8 per cent of EU exports, the EU accounts for an overwhelming 65 per cent of Switzerland’s foreign trade.

How far the EU is prepared to go to solve Switzerland’s constitutional conundrum will emerge in the coming months.