Sweden votes as the centre-left opposition holds its lead 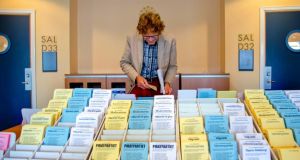 A man chooses among ballot papers at a polling station during the Swedish general election in Goteborg today. Photograph: Adam Ihse/Reuters/TT News Agency

Polls showed Sweden’s centre-left opposition heading for a narrow election victory today, on a platform of increased spending on job schemes, healthcare and schools after eight years of tax cuts under the centre-right Alliance.

The Social Democrats, the largest single party and polling around 30 per cent, hope to rule with the Green Party.

But even if opinion polls are born out, they are likely to rely on winning support from the Left Party and possibly smaller parties in the Alliance to form a government.

Negotiations could be hard and protracted.

Many Swedes are worried that reforms under the Alliance government have gone too far, weakening healthcare, allowing business to profit from schools at the expense of results and dividing a nation that has prided itself on equality into haves and have-nots.

But a splintered opposition has failed to tap into voter unease and is unlikely to win a clear majority in parliament.

The anti-immigration Sweden Democrats may hold the balance of power but other parties refuse to work with them.

“We need to re-find our values, those that say we take care of each other, that it is not all about the rich getting it better,” said Sofia Bolinder, playing with her young daughter in a playground after voting in the suburb of Skarpnack in southern Stockholm.

One poll late yesterday put the gap between the centre-left and the four-party Alliance government at just 3 percentage points.

“All the signs point to the fact that the centre-left are going to be bigger than the Alliance, but that they won’t get a majority,” Mikael Sundstrom, a political scientist at Lund University, said.

“It is going to be a very difficult situation for them.”

Voting with his wife today in a sunny central Stockholm, Social Democrat leader Stefan Lofven, said he would continue campaigning until polls closed at 6pm. “I feel good and I think we have a strong chance,” said Lofven, dressed in a dark suit and a purple tie and surrounded by a crowd of reporters. “We have focused on our main issues - jobs, schools welfare.”

Prime minister Fredrik Reinfeldt repeated that his government would resign if it is smaller than the centre-left as he cast his vote in well-off Taby, north of Stockholm.

“We were very much behind (in the polls) in the spring and into the summer but we’ve narrowed the gap, made a fantastic campaign. Tonight we will know,” he said.

Widely admired for its strong economy, stable government and liberal attitude to immigration, Sweden nevertheless faces significant challenges, which a weak government will struggle to deal with.

Unemployment is high at 8 per cent, hitting immigrants and young people especially, and a potential housing bubble threatens economic stability.

The rise of the far-right points to a society starting to question its role as what prime minister Fredrik Reinfeldt calls “a humanitarian superpower”.

The Sweden Democrats, who want to cut the number of asylum seekers by 90 per cent, are set to double their share of the vote to around 10 per cent.

On the cover of Swedish daily Expressen, welder-turned would-be prime minister, Mr Lofven held a sign saying: “Do as we are doing, say ‘no’ to racism”.

The Left Party - formerly Sweden’s communist party - wants to raise income and company taxes and exclude profit-making businesses from schools and welfare, policies that the Social Democrats and Greens reject.

The Liberal and Centre parties, the two smallest in the current government, have snubbed Lofven’s call for a broad-based government, raising the threat of deadlock after the election, or, in the worst case scenario, a new vote.

Recent polls show the Social Democrats, Greens and Left parties with around 46 per cent of the vote against the Alliance’s 41 percent.