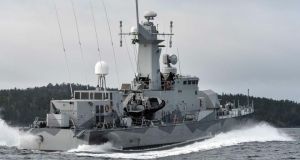 Peering out at the narrow stretch of gunmetal grey sea separating the small harbour from an island at the southern tip of the vast Stockholm archipelago, Johannes gave a shrug.

“I am 99 per cent sure there is something out there,” he said. “But I’m 100 per cent sure they won’t find it. One tiny submarine has got the entire Swedish navy tied up, all 200 sailors, with neither the resources nor the weapons to deal with it.”

The 58-year-old Swedish naval commander, who asked not to be named, was having a day off yesterday, strolling along the sea wall in Nynashamn, 40km south of Stockholm, while the fleet continued its search for a suspected Russian submarine.

Thirty years ago Johannes commanded a sonar-equipped craft that regularly responded to alleged Russian submarine incursions for more than a decade - a period when Sweden was routinely gripped with cold war panic.

“We knew they were there because we could see the traces they left on the sea floor,” he said.

But apart from a Soviet craft that ran aground near Karlskrona in 1981, they never found a single submarine.

Battleships, minesweepers, helicopters and more than 200 troops have scoured an area about 30km to 60km from the Swedish capital since Friday after reports of a “manmade object” in the water.

Supreme commander general Sverker Goranson told reporters yesterday there was “probable underwater activity” and that he was ready to use “armed force” to bring the vessel to the surface.

Sweden’s armed forces did not respond to requests to comment on media headlines that the navy had “made contact” and was “ready to bomb the object”.

Frantic efforts to locate the culprit have seen the navy crisscross the area in response to possible sightings.

After the focus of the search shifted once again yesterday, a drenched Finnish camera crew returned to shore in Nynashamn after their boat was swamped by the wake of a navy ship heading north.

Fishermen rubbed their hands at the chance to hire out their craft to the Scandinavian press pack for 1,200 kronor (€130) an hour. “It’s good business,” said Mats Nilsson (47)

“The local people pay no attention - the Russians have always been here, they never went away. That sub probably showed itself just to attract attention while the real operation takes place elsewhere.”

Despite the submarine hunt - and the media circus - locals seemed determined that life should go on as normal.

“We remember how they used to come here and drop depth charges on the mink and the herring, they never found anything,” says Lennard Lundqvist (67) referring to research suggesting that early Soviet submarine scares were no more than bubbles and squeaks emitted by Baltic wildlife.

“The navy are more trouble than the Russians - they stop me setting my nets,” said Lundqvist, who has fished here for 40 years.

Last year he strayed too close to the nearby Musko naval base and was fined.

Memories of the cold war are still fresh in this part of Sweden, and the period’s physical embodiment is on the island of Musko, 30 minutes’ drive away.

In the 1950s a cavernous underground naval base capable of withstanding a nuclear attack was created there.

With 12 miles of subterranean roads, the complex - top-secret for decades - resembles a set from a James Bond movie.

The cloak-and-dagger excitement of the current submarine chase has seen Sweden’s media seize on scraps of information from the armed forces and public. Newspapers have hired helicopters to follow the search from the air.

More than 100 sightings of “suspicious objects” have been reported.

The hype receded briefly after a “mysterious man in black”, allegedly sought by the secret services as a possible Russian special forces agent, turned out to be a pensioner called Ove who was doing a spot of angling.

A photo of a submarine turned out to be of a Swedish one. A popular freesheet yesterday led its front page with remarks by a former commander-in-chief of the armed forces that there was no chance of finding a submarine: “We looked for 10 years and didn’t find one,” he told the paper.

Conspiracy theories are rife, given that the new minority government of Social Democrats and Greens presents its first budget tomorrow. Already the new finance minister has pledged more money for Sweden’s military, apparently in response to the submarine panic, even though the Green party campaigned on defence cuts.

“It has been blown out of all proportion,” said Simon (22) a telephone salesman from Gotland, the large Baltic island often seen as a possible point of entry for Russian forces into Sweden. “I can’t see what there is for the Russians there,” he said.

“No one is worried.”

Olle Jatko, the officer in charge in Nynashamn police station, was beaming. “We’ve seen it all before,” he said. “But Sweden must join Nato, ” he added. “We need more money for the military.”