Former IMF chief had been under investigation over Lille sex parties 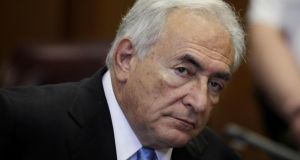 Former IMF managing director Dominique Strauss-Kahn will have to defend himself in a French court on aggravated pimping charges. Photograph: Todd Heisler/AP

Dominique Strauss-Kahn, the former director of the IMF who was forced to resign in 2011 after a New York hotel maid accused him of sexual assault, will stand trial for “aggravated pimping”, French prosecutors said yesterday.

Mr Strauss-Kahn had been under investigation for two years for his involvement in sex parties at the Carlton Hotel in the northern city of Lille.

Judiciary police questioned him for 32 hours in February 2012. He did not deny having participated, but claimed he did not know the young women were prostitutes.

Mr Strauss-Kahn had staged an incipient comeback, appearing in a dinner suit at the Cannes film festival with his new companion, a television executive. He lectured French senators about banks and tax evasion last month, criticised European leaders in a television interview and remarked condescendingly that French president François Hollande “does what he can”.

“Aggravated pimping” indicates the presence of more than one prostitute.

Mr Strauss-Kahn is charged with 13 cohorts, including the Carlton’s former head of public relations, René Kojfer, who is alleged to have instigated the “parties fines”, Dodo la Saumure, a Belgian bar owner accused of providing the women, business executives and a former security chief for the city. David Roquet of the Eiffage public works company is suspected of putting costs related to the sex parties on his business expenses.

If convicted, the men could be sentenced to 10 years in prison and receive a fine of €1.5 million.