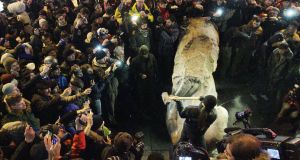 A protester smashing a statue in Kiev back in December 2013. Photograph: Anatoli Boiko/AFP/Getty 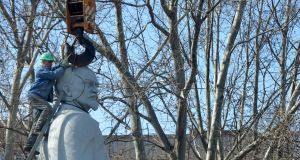 In the end, no one tried to save Iron Felix.

The head and shoulders of a statue to Felix Dzerzhinsky, founder of the Bolshevik secret police that became the KGB, were gently lifted from his body yesterday in the Ukrainian city of Zaporizhia, and lowered to the ground where a small crowd cheered and took selfies beside the toppled symbol of Soviet terror.

This was the latest communist-era monument to fall in Ukraine, as it erases thousands of reminders of decades spent as a Soviet republic, ruled by a Kremlin that is waging an undeclared war to stop it allying with the West.

Ukraine passed a law last April banning communist symbols and the denial of the “criminal nature” of the Soviet regime, and demanding the renaming of towns and streets that honour Soviet officials.

The law also outlaws Nazi symbols, and prohibits denial of the role played by nationalist guerrillas in battling for Ukraine’s independence during the second World War – militias that sometimes fought alongside the Germans against Soviet forces, and whom many Ukrainians lionise and Russia calls fascist collaborators.

Hundreds of monuments to the Soviet leader have been toppled across Ukraine in the two years since its revolution, which for many Ukrainians was a rejection of Kremlin domination and an insidious Soviet mindset that they see revived in today’s Russia, under the autocratic rule of ex-KGB agent Vladimir Putin.

But not all Ukraine’s communist ghosts are succumbing quietly to exorcism, and many people around the country complain that the government in Kiev is wasting precious time and money on this vast renaming process. With Crimea under Russian control, much of industrial eastern Ukraine held by Russian-backed separatists, the economy in disarray, corruption still rampant and the government largely discredited, Ukrainians have much to worry about besides whose name their village, street or school should bear.

Volodymyr Viatrovych, head of Ukraine’s Institute for National Memory and an author of the de-communisation law, believes his nation is now going through a vital stage in securing real independence from Russia.

“Our revolution stopped Ukraine sliding back to the Soviet past,” he said in a recent interview in Kiev, close to the Maidan Square that was at the heart of 2013-2014 protests against Kremlin-backed president Viktor Yanukovich and his allies.

As Ukraine seeks to modernise and align its economy with the European Union, helped by billions of euro in western aid, and its military trains with troops from Nato states, Viatrovych says it must also expunge the traits of its Soviet past.

The de-communisation laws will help Ukraine follow the path of central European states that underwent a similar process in the 1990s, he argues, moving it away from Russia and other ex-Soviet states that are still characterised by massive corruption, limited democracy and free speech, and dominant security services.

The Kiev authorities want all the renaming and statue-toppling to be completed by May 21st, despite stubborn resistance in many places to the loss of long-held names that tend to be particularly cherished by older Ukrainians.

Some local officials have tried novel ways to save existing names – by declaring that a city’s “October” district will no longer refer to the 1917 Bolshevik revolution but to the month of its liberation from Nazi troops, for example; or announcing that a Dzerzhinsky region will henceforth honour Felix’s little-known neurologist brother.

The Lenin statue in Zaporizhia is slated for demolition later this month, and Viatrovych and other Ukrainian officials will hope it goes as smoothly as yesterday’s removal of Dzerzhinsky’s head.

But as they pursue their de-communisation drive, they would do well to note the comment of engineers who left the removal of Iron Felix’s plinth for another day: taking the top off is easy – shifting the foundations is a far tougher task.