State to be requested to offer €28.5m to Turkey 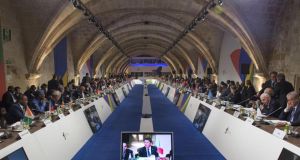 The summit on migration in Valletta, Malta: With more than 2.2 million Syrian refugees currently residing in Turkey, the country is widely seen as playing a key role in Europe’s response to the crisis. Photograph: Tiberio Barchielli/EPA

Ireland will be requested to offer €28.5 million in emergency funds for Turkey to help deal with the refugee crisis as part of a €3 billion European Union action plan for Turkey proposed on Thursday.

EU leaders meeting in Valletta, Malta, agreed to hold a special summit with Turkey by the end of the month to sign off on the plan, which would see the union provide funds and visa liberalisation to Turkey in exchange for support in tackling the migration crisis.

With more than 2.2 million Syrian refugees currently residing in Turkey, the country is widely seen as playing a key role in Europe’s response to the crisis, which has seen more than 800,000 refugees enter the EU this year.

But the notion of providing fresh funds and accelerating accession negotiations with Turkey is a contentious one for some member states, coming just days after the European Commission issued a damning report on Turkey’s standards of judicial independence and media freedom in an annual report on the country.

Under a draft proposal circulated by the commission on Thursday, Ireland will be asked to provide €28.5 million to the fund, equivalent to 1 per cent of gross national income. This compares with €410 million for Britain, €7.3 million for Croatia and €534 million for Germany.

Minister for Justice Frances Fitzgerald, who attended the meeting, confirmed Ireland would contribute €3 million to the fund and was ready to accept the first 20 refugees under the EU relocation plan by December.

While she accepted there was a challenge in encouraging some refugees to accept relocation to countries to which they were assigned, she said it was the job of officials to communicate the benefits of coming to countries such as Ireland.

UN special representative for migration Peter Sutherland, who addressed leaders at the summit on Wednesday night, broadly welcomed the action plan but stressed that it must be implemented.

As EU leaders met for their fifth crisis summit on the refugee issue, Sweden became the latest European country to introduce border controls. The country, which has accepted the highest number of refugees per capita, has been struggling to cope with the number of migrants arriving to its borders.