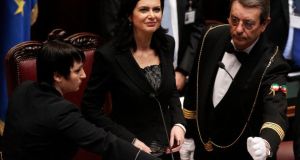 Staff members fix the microphone before Laura Boldrini from the centre-left gives a speech after the vote electing her as the new lower house president at the Chamber of Deputies in Rome. Photograph: Reuters


Italy continues to run the risk of a second general election in five months following the opening of parliament at the weekend in the wake of the February general election, which produced no outright winner but rather a hung parliament.

At first glance, parliament seemed to take a major step forward on the road to forming a new government when, in the first item of business, candidates from the centre-left were elected as Speaker in both houses. Although the centre left won most votes last month, they failed to win control of both houses, partly thanks to the current, bizarre electoral laws.

As of now, however, the three largest parties in parliament, the Democratic Party (PD), the People of Freedom (PDL) party of media tycoon Silvio Berlusconi and the online protest movement M5S have failed to agree the formation of any sort of government.


Bersani first choice
When state president Giorgio Napolitano holds his consultations to nominate a prime minister this week, his first choice seems certain to be the PD party leader, Pier Luigi Bersani, as head of the party which polled most votes. However, Mr Bersani’s task in winning the support necessary to control the Senate remains profoundly difficult.

Inevitably, the most unpredictable element in this complex jigsaw remains the M5S, led by former comedian Beppe Grillo who, however, does not sit in parliament. Last Saturday that unpredictability was underlined when a number of newly elected M5S Senators immediately rejected the party whip and voted for the PD candidate as Senate speaker, namely Italy’s former chief anti-Mafia prosecutor, Piero Grasso.


Grillo’s policy
Mr Grillo’s policy is to deny his party’s support to candidates from either of the two largest parties, given that his aim appears to be to create a paralysis of the parliamentary system which would prepare the way for radical reforms.

However, a number of his senators, perhaps a dozen, chose to ignore the party line in Saturday’s secret ballot vote, giving their votes to Senator Grasso rather than casting empty ballot sheets.

The “revolt” by the M5S senators had been prompted by the fact that the Senate speakership had been contested by Senator Grasso for the PDs and by the PDL’s Renato Schifani from Palermo, the outgoing President of the Senate but someone who has long been accused of ties to the Mafia.

A number of the Sicilian M5S senators are believed to have argued that the empty ballot sheet would prove to be a de facto vote for Senator Schifani, something that would be totally unacceptable to their Sicilian electors. At a dramatic party meeting on Saturday, Sicilian M5S senator Francesco Campanella told his colleagues:

“If Schifani wins this vote, we’ll be hammered when we get back to Sicily . . . ”

That vote, however, prompted an immediate angry reaction from party leader Grillo who called on the dissidents to resign. Earlier on Saturday, Laura Boldrini, a former spokeswoman in Italy for the UNHCR, was easily elected as the centre-left candidate for speaker of the Lower House.