Spain to hold new election after months of stalemate 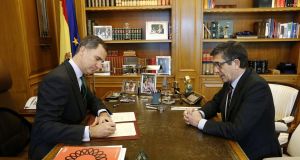 King Felipe has dissolved Spain’s parliament and called fresh elections for June, after four months of political limbo during which parties failed to agree on the formation of a new government.

The royal decree, signed by the monarch on Tuesday morning, marks the first time in Spain’s democratic era that a general election has had to be repeated. An inconclusive election was held on December 20th.

“We haven’t managed to fulfil the voters’ mandate,” said the speaker of Congress, Patxi López, after meeting the king.

“I hope these last four months help us to understand a few things, including the idea that ‘dialogue’, ‘pact’ and ‘negotiate’ may be old words, but they are necessary in a democracy when it comes to managing political diversity.”

The new election will be held on June 26th, with the campaign officially beginning two weeks earlier.

Spain entered uncharted waters after the December election as three-and-a-half decades of dominance by the conservative Popular Party (PP) and Socialists came to an end due to the emergence of two new forces: the anti-austerity Podemos, on the left, and the liberal Ciudadanos, on the economic right.

Although the governing PP won the election, it lost its majority in a fragmented new parliament.

In an unprecedented move, acting prime minister Mariano Rajoy rejected King Felipe’s invitation to try to form a new administration, knowing he would not receive the support of any other major party. Socialist leader Pedro Sánchez, whose party came second in the election, rejected Mr Rajoy’s calls for a grand coalition.

In March, Mr Sánchez made a bid to become prime minister, but fell short of the congressional votes needed, gaining only the support of Ciudadanos.

When last-ditch talks between the Socialists and Podemos, aimed at forming a leftist-centrist coalition, floundered, repeated elections became inevitable. Monday night was the deadline for a governing pact to be closed.

Ideological differences over the economy have been an obstacle to a deal, but so too has the ongoing bid for independence by Catalonia. Of the four main parties, only Podemos is willing to hold a referendum on secession for the region.

A poll released on Tuesday by the CIS national research centre suggested that the June election could see a similar result to that of December, with 78 per cent of those surveyed saying they would vote the same way in the re-run.

Podemos, which came third in December, is currently in talks with the communist-led United Left (IU) coalition, with a view to running on a combined electoral ticket in June and overhauling the Socialists.

So far, there is little to suggest that any of the leaders of the main parties will be replaced. However, Esperanza Aguirre, a former PP premier of the Madrid region and a frequent critic of the acting prime minister, has questioned Mr Rajoy’s role and the party’s electoral strategy in an interview with the right-leaning think-tank Red Floridablanca.

“It’s not just the leadership, it’s the message and the renewal of the projects and solutions that we put to Spaniards [which need to change],” she said.