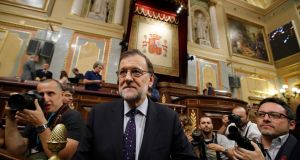 Spanish acting prime minister Mariano Rajoy during the investiture debate in the Spanish parliament in Madrid. Mr Rajoy secured the backing of only 170 representatives in the 350-strong assembly. Photograph: Juanjo Martin/EPA

Spain’s acting prime minister Mariano Rajoy failed on Friday to win the confidence of parliament to serve a second term as prime minister, starting the countdown to a possible third election if a deal can’t be brokered in the next two months.

As on Wednesday when he lost a first investiture vote, Mr Rajoy secured the backing of only 170 representatives in the 350-strong assembly.

Liberal newcomer Ciudadanos voted in favour of Mr Rajoy, as did a small party from the Canary Islands. The Socialists, anti-austerity alliance Unidos Podemos, and regional parties from the Basque Country and Catalonia voted against him, making 180 rejections.

There were no abstentions, making the results of the second vote exactly the same as the first vote on Wednesday. – (Reuters)