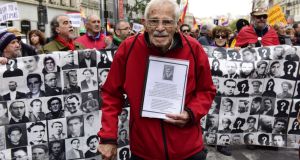 Demonstrators show Francoism victims during a march in Madrid. If the Pamplona proposal is passed it would be the first time a local authority in Spain has sought legal proceedings in connection with abuses under the Franco regime. Photograph: Javier Soriano/AFP/Getty Images

The northern Spanish city of Pamplona is expected, on Friday, to approve a motion calling for a criminal investigation into human rights abuses committed during the 1936-39 civil war and the dictatorship that followed.

It would be the first time that a local authority in Spain has sought to begin legal proceedings in connection with abuses committed under the regime of Gen Francisco Franco, who sparked the civil war by rebelling against an elected republican government.

After winning the conflict, he ruled as a dictator until his death in 1975.

Pamplona was not in the front line of the war, although the motion being voted on, on Friday, states that, in the surrounding Pyrenean region of Navarra, Franco’s troops carried out a “completely gratuitous, bloody, massive and brutal repression”.

A total of 300 inhabitants of Pamplona and 2,000 people from Navarra were murdered in the days that followed Franco’s right-wing uprising, according to the proposal, sections of which were published by Público newspaper.

“From the first moment, the elected authorities were persecuted and detained, social organisations were suppressed and their members detained and jailed,” it reads.

Pamplona’s town hall is governed by a coalition of left-leaning and nationalist parties, led by Bildu, which wants independence for Navarra and the neighbouring Basque Country.

In a preliminary meeting held with victims’ groups, all of those parties backed the motion, which is expected to lead to a lawsuit being registered in a local court.

“This lawsuit is of huge importance when it comes to ending the impunity of the crimes of the dictatorship,” said Carlos Slepoy, a lawyer representing Franco victims who announced the move in a press conference.

“This is the first, but we’re convinced there will be many more.”

Spain has never investigated the crimes of the civil war or the Franco era.

After the dictator’s death, the country swiftly made the transformation into a parliamentary democracy.

Politicians from the Franco regime worked together with former opposition figures on the left, approving an amnesty law and agreeing not to use the past as a political weapon.

However, this meant that Franco’s many victims – numbering over 100,000, according to campaigners – have never seen justice done.

In 2008, high court judge Baltasar Garzón opened a probe into the regime’s crimes, but the judiciary blocked it.

Although many of those who would face accusations of abuses are dead, campaigners still want survivors to face the justice system as well as more acknowledgment for victims.

Argentine judge María Servini de Cubría­ has been pursuing a similar investigation since 2010, using the principle of universal jurisdiction, according to which serious crimes committed in one country can be probed by a foreign magistrate.

“It’s very good news that this lawsuit is being brought against the coup d’état and those criminals,” said Olga Alcega, whose grandfather was killed and buried in a mass grave not far from Pamplona in 1936.

However, she doubts whether anything will come of the Pamplona initiative and she cites the thwarted probe by Judge Garzón.

“I still believe that in Spain the judiciary doesn’t pursue justice,” she told The Irish Times. “Steps are taken, but the real problem is never really resolved. All our governments until now have been afraid to tackle this.”

November 20th marked the 40th anniversary of Franco’s death. Controversially, several church services were held in his honour and the Francisco Franco Foundation plans to hold a dinner in tribute to the dictator in a Madrid hotel on December 3rd.