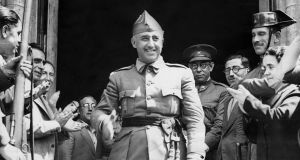 Authorities in the Spanish city of Pamplona have exhumed the bodies of two of the chief conspirators in the military uprising that sparked the country’s 1936-1939 civil war, in a move that has provoked a backlash from the political right.

On Wednesday morning, work began to dig up the remains of José Sanjurjo, one of the masterminds behind the 1936 coup d’état against the elected republican government, from the crypt of a building in central Pamplona known as the Monument to the Fallen.

The exhumation was due to finish late on Wednesday and the remains given to his family. Two weeks earlier, Emilio Mola, another key figure in the putsch, was exhumed from the same building.

Mola remains a particularly divisive figure, known for his bloodthirsty nature and for declaring that the right-wing rebels should “create an atmosphere of terror, convey a feeling of supremacy, eliminate without scruples or hesitation all those who don’t think like us”. He was also seen as a potential rival to Francisco Franco, the general who led the nationalist right to victory in the civil war before governing Spain as a dictator until his death in 1975.

Both Sanjurjo, who was born in Pamplona, and Mola, who was the city’s military governor, died in separate aircraft crashes, in 1936 and 1937 respectively.

Pamplona, in the northern region of Navarre, is governed by the leftist Basque nationalists of EH Bildu.

“The withdrawal of the remains of the rebel generals Emilio Mola and José Sanjurjo is a matter of common sense,” the city’s mayor, Joseba Asirón, told the newspaper Público.

He added that it was “inconceivable that in a city like Pamplona, which suffered so much during the civil war and under the subsequent regime, the remains of those soldiers should remain buried there 80 years after the war and 40 years after Franco’s death, in a public place and with military honours”.

Another six casualties of the war who fought on Franco’s side were being exhumed on Wednesday, the last remaining bodies in the Monument to the Fallen.

The initiative follows the Navarre regional parliament’s approval of a historical memory law in 2013, seeking to offer redress to civilian victims of the civil war and Franco’s repression.

But Pamplona city hall has faced heavy criticism over the move. When it announced the exhumations in September, then-interior minister Jorge Fernández Díaz accused the political left of “trying to win the civil war” decades after it had ended.

Elena Samaniego, also of the conservative Popular Party, said the Pamplona authorities “continue to fail to pay attention to people’s real problems and look more to the past than the future”.

Meanwhile, some of the families of those buried inside the monument opposed the exhumations, as did the local archbishopric.

However, activists point out that the Spanish government has failed to implement a 2007 national historical memory law and that over 100,000 Franco victims lie in unmarked graves. According to Amnesty International, this makes Spain the country with the highest number of mass graves in the world, after Cambodia.