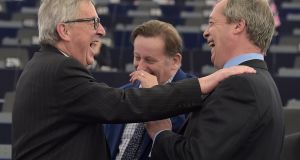 As Britain’s prime minister David Cameron faced mounting criticism from within his own party about his draft reform agreement with the European Union, senior EU figures expressed optimism that a deal would be done at an EU summit in two weeks time.

Opening a debate in the European Parliament on the forthcoming British referendum, Bert Koenders, the foreign minister of the Netherlands, which holds the EU Council’s six-month rotating presidency, said the proposal “paves the way for an agreement in the European Council” in February.

“It is of paramount importance that we can continue our constructive dialogue to make the European Union work better for both the United Kingdom and all other member states,” he said. After that, he added, it would be up to the British electorate to decide.

Senior officials representing the EU’s 28 member states will give their first official verdict on the draft settlement on Friday in Brussels.

Addressing MEPs during yesterday’s debate in Strasbourg, European Commission president Jean-Claude Juncker described the draft settlement offered by the European Council as “fair for the UK and fair for the other 27 member states”. He noted that Britain already benefited from more opt-outs and protocols than any other member state, and the settlement’s reference to Britain’s exemption from further political integration recognised this.

“The settlement recognises that if the UK considered it is now at the limits of its level of integration then that is fine. At the same time it makes clear other member states can move towards a deeper degree of integration as they see fit,” he said.

Highlighting an issue that is likely to surface as a point of contention over the next two weeks, Mr Juncker said the duration of the “emergency brake” on migrants’ benefits was crucial to ensuring compatibility with the EU treaties.

But Ukip leader Nigel Farage denounced the deal as “pathetic”. He said that, while Mr Cameron had signalled “big intentions” when he began negotiations, “what we got was a letter from Mr [Donald] Tusk [European Council president] in which there’s no treaty change, no powers returned to the UK and no control over our borders at all”.

“There’s far too much at stake for us to quibble or try to oppose this package, even if some are understandably not entirely happy with it. I would urge you nonetheless to accept it.”

A summit of EU leaders in Brussels in two weeks’ time is expected to be dominated by the British referendum. EU officials have said a second summit before early March is possible should agreement not be reached in mid-February.